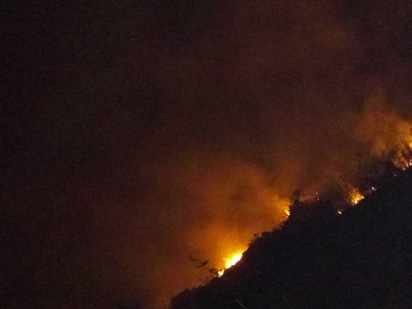 Share this on WhatsApp
Spread the love
The Ondo State Police Command has yet to arrest those herdsmen who allegedly burnt down the farm of former Secretary to the Government of the Federation Olu Falae on Sunday,
The five-hectare oil palm plantation is at Ilado Village in Akure North Local Government Area of the state.
Police Public Relations Officer of the command said on Monday it could not be ascertained that the arson was carried out by herdsmen because there was no arrest yet.
Femi Joseph, however, explained that the command had begun investigation on the incident.
According to him, the state Commissioner of Police Gbenga Adeyanju and the state Commissioner for Agriculure,  Gboyega Adefarati and other top government functionaries  visited the farm to assess the extent of damage.
“I want to tell you that the affected area on the farm did not have much crops. Although that is not to say anybody has the right to burn another person’s farm.
“We are still investigating, we don’t know those who did the act, so we can’t say specifically whether it was a particular person or not because we have not arrested anybody yet and we didn’t meet anybody there when we got there today (yesterday).
ALSO SEE: Herdsmen burn down Falae’s farm
The pan-Yoruba socio-political association Afenifere described the attack on Falae as an attack on the entire Yorubaland.
“The silence of the Head of State on these issues is very ominous and it doesn’t augur well for the oneness of this country because if somebody of the status of Chief Falae is undergoing this type of trauma and the President doesn’t say anything and they say silence means consent,” said Afenifere’s Secretary-General  Sehinde Arogbofa.
This is the third time the SDP’s chairman would be burned in three years by people suspected to be herdsmen.
Share this on WhatsApp