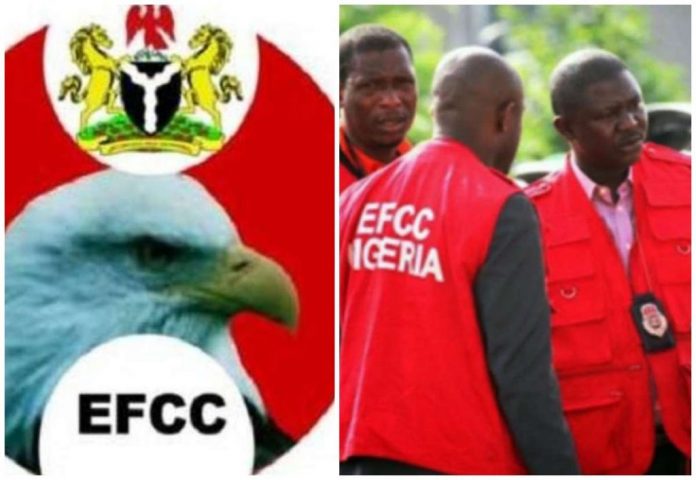 Share this on WhatsApp
Spread the love
A Veteran Journalist, who is also the Olori-Ekun of Olowogbowo, Lagos Island, Prince Uthman Ademilade Shodipe-Dosunmu has petitioned the EFCC over an alleged conversion of his assets by Corporate Building Nigeria Limited, owned by one Dapo Alli Balogun.
Shodipe-Dosunmu said that following his petition, Dapo Alli –Balogun was first arrested by the EFCC, Lagos Office but was released two hours later.
He said Alli Balogun early  this year was told to report to   Abuja  Headquarters where the case is domiciled.
“But contrary to the EFCC establishment Act of 2004 , he was released without profiling or given Asset Declaration,” the journalist said.
Shodipe-Dosunmu said he  observed that after he complained, the EFCC official handling the matter,  Mr Hafeez Mustapha became annoyed and said he should not be told how to do his job.
He explained that Dapo Alli-Balogun was later given asset Declaration form several months after his first arrest.
“A day after his interrogation in Abuja and  he was released,  a mysterious fire occurred under the Apongbon Bridge, the location of  the said land leased from Federal Ministry of Works but which Dapo- Alli –Balogun has turned to his own with several goods perished,” he said.
Uthman Dosunmu said his petition to the EFCC was received on September 29, 2021, adding that the subject matter of the petition is the conversion of his assets by Corporate Building Nigeria Limited, owned by one Dapo Alli-Balogun.
He said though the petition was adopted on November 11, 2021 and was endorsed by the Chairman of the Commission, Mr. Abdul Rasheed Bada, the EFCC official ,  Sectional Head of CTGI (1), Mr. Hafeez Mustapha has displayed a total unprofessionalism in the handling of the matter.
“He has not hidden his bias that he has compromised with the suspect. He has been openly very chummy with the suspect, exchanging his personal drinking cup with him, and other matters I will not say now.
“When I challenged him, that the suspect has neither been profiled nor given an asset declaration form to fill, Mr. Hafeez Mustapha got angry, flared up and said I should not teach him his job.
“Mr. Hafeez  Mustapha exposed me to a very dangerous situation when he invited me to a meeting with the suspect on Wednesday, 16th February, 2022, asking me to interact with the suspect.
“I haven’t the vaguest idea  the purpose of the meeting. I declined to engage the suspect and submitted a paper detailing my objection and also intimating Mr. Hafeez that releasing the suspect that early is capable of compromising the case. I have been proven right.
“I have personal information that will show that Mr. Hafeez Mustapha  is compromised and his integrity is not to be trusted.”, Shodipe-Dosunmu said.
He said, for instance, “When I got information of the fact that he, Mustapha was in Lagos on Thursday May  5 and I have been told that Ali Balogun collected cash running into hundreds  of millions of naira  from about 70 traders this  February .
“This basically  confirms the fact that he had been collecting cash to evade bank records, Hafeez promised to take the statements of the victims in Lagos since he was also in Lagos at the time.  But to my utter dismay, he did not. To my astonishment, this information later got to Ali-Balogun. God knows how ?
“Whoever leaked this information between me and him put the lives of the witnesses at stake and basically compromised the proceedings. It is definitely not me ! He is the only person I divulged the information to.
“The witnesses were later threatened by Ali -Balogun and his thugs. They have since refused to cooperate because they  are scared stiff. I don’t blame them.
“My position is simply this: I do not trust Hafeez Mustapha’s probity or competence in this matter. He is now an accessory after the fact. He is neck deep in very untidy affairs.  I will be appealing to the higher authority to query his  role in these matters.
“Even after the suspect had acknowledged his guilt in a written statement, Hafeez advised the suspect to be  paying 5 million naira each whenever he chooses.
“This is quite outrageous.I have refused to accept the two tranches of 5 million he has brought because it shows a deliberate delay tactics. When the heck will he finish paying the debt with a meagre 5 million every other month out of a debt of 1.3 billion naira,” Shodipe Dosunmu said.
But when contacted, Mr. Hafeez Mustapha said he has not compromised his position.
“ I am a professional  and I can’t compromise . I would like to say this,  there  are channels in the commission which can be explored when a complainant has any complaint against an investigator.
He can write  letter of complaint to the Director of Operations and when such a letter gets to him, he will call us and we would present the file.
“You know I understand how he feels but we are also professionals and we will do the right thing”, he said.
According to Shodipe-Dosunmu, the illegal conversion is worth N1 billion, three hundred and forty-nine million, and six hundred and eighty thousand. (1, 349, 00680.00).
He explained that  in 2013, he facilitated an approval for Dapo Alli-Balogun and Corporate Building Nigeria Limited, for a lease under the Apongbon Bridge in Lagos .
“We (I and Ali Balogun) drew up a Memorandum of Understanding which was signed and sealed and registered with the Commissioner of Oaths in the court”; he said.
He further said that contrary to the agreement they had, Dapo Alli-Balogun illegally converted all these assets to his own since 2013 and refused to pay him his 40 per cent as agreed .
Share this on WhatsApp