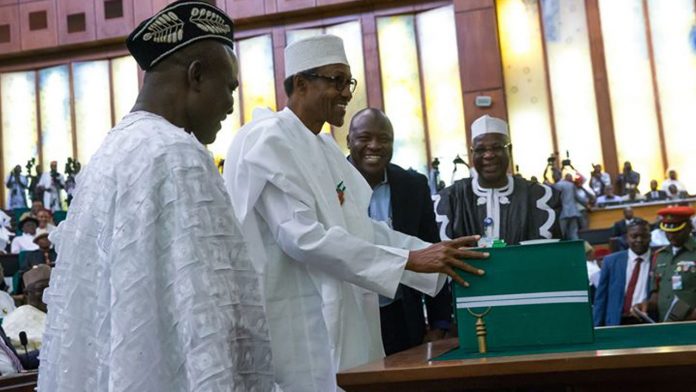 There are indications that the 2018 budget estimates appropriation bill recently presented by President Muhammadu Buhari to the National Assembly may not be passed by the end of December 2017 as earlier planned, National Daily has gathered.

It was learnt that the poor implementation of the 2017 budget, coupled with a deluge of executive proposals to execute in and within the next seven weeks by the National Assembly may be responsible for this delay.

National Daily gathered that some of the executive proposals to be executed by the National assembly in the next seven weeks include; 2018-2020 Medium Term Expenditure Framework (MTEF) and Fiscal Strategy Paper (FSP); N135.6 billion virement; 2017 budgets of 28 Federal Government agencies and the $5.5 billion foreign loans.

Foster Ogola, a member of the Senate Public Accounts committee, said that due to poor implementation of the 2017 budget, the possibility of passing the 2018 budget into law before December 31st could as well be ruled out.

“My assessment is that the implementation of the 2015, 2016 and the 2017 budgets have been poor because of the burden that comes with the budget. What I think has gone wrong is that the planning is done yearly under the medium term expenditure framework (mtef).”

He said countries that achieve milestones in budgeting have a five-year budget plan. “We must plan effectively on how to fund budget. Instead of bringing up an N8 trillion budget and achieving 20 percent, it is better we say N2 trillion budget and you are ensuring that you do everything possible to achieve.”

Ogola expressed concerns that the National Assembly’s refusal to stick to laws guiding budget preparations has always been the major challenge facing the Nation’s budgeting process.

Recall also that two Senators, John Enoh, Abdullahi Gumel and Danjuma Goje, members of the Joint Committee on Appropriation and Finance, in an Interactive session with Kemi Adeosun, Finance Minister, and Udoma Udo Udoma, Minister of Budget and National Planning, had expressed their opposition to rolling over 60% 2017’s budget to 2018, preferring rather to gradually transit to January-December financial year.