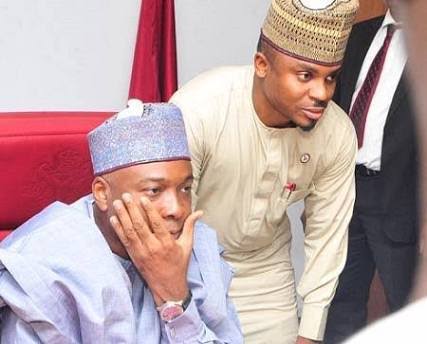 Barely 48 hours after Festus Adedayo, aide to former Senate President Bukola Saraki was appointed as Special Adviser on Media and Publicity to new Senate President Ahmed Lawan, his appointment has been revoked.

National Daily gathered that the sudden change of mind was not unconnected with pressured on Senator Lawan by some highly placed members of the All Progressives Congress who saw the appointment as a kind of reward to Saraki.

Abu Andrew, spokesman of the group, had said the appointments were “glaring” reward to people who have insulted Buhari.

“No doubt, the appointments are glaring reward for people who have not only insulted the person of President Muhammadu Buhari but also severally maligned the integrity of the office he occupies,” Andrew fumed.

Buhari’s wife, Aisha, tweeted the video of the group’s protest on her verified account, which contained the caption “You cannot drive an agenda with people who don’t believe in that agenda…how you will achieve your purpose if you bring in people who fought against your agenda.”

“You cannot drive an agenda with people who don’t believe in that agenda…how you will achieve your purpose if you bring in people who fought against your agenda.”

In a letter signed by Lawan’s Special Assistant on Media, Mohammed Isa, announced the withdrawal of the letter of appointment to Adedayo.