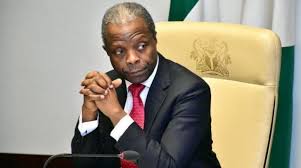 The recent whittling down of the influences of the Vice President, Yemi Osinbajo in the presidency was unconnected with the scheming and machinations for 2023 when President Muhammadu Buhari will be completing his final term in his office, National Daily has gathered.

Recall that it all started with the disbandment of the Economic Management Team (EMT) chaired by the vice president on Monday. The presidency announced the replacement of the EMT with the Economic Advisory Council (EAC) via a statement by presidential spokesman Femi Adesina.

Without mincing words, the presidency said the council would be reporting directly to President Muhammadu Buhari, thus removing the management of the country’s economy from Osinbajo’s supervision.

Before the uproar generated by the replacement of the EMT settled, then comes the stripping of Osinbajo of powers to supervise some federal government agencies. A memo to that effect has been issued to the vice president

Also a senator, who will not want to be named, said the power tussle was part of the plot to dump the Southwest ahead of 2023. “It’s 2023 calculations but in my own opinion fighting the Southwest would not be good for the polity,” the lawmaker said.

A top northern politician also linked the development to the scheming for 2023. Speaking anonymously, the politician said there was a lot of intense activity by people very close to the president on 2023.

“They want to get an edge in the competition over who will succeed him (Buhari) come 2023. The last thing that the president who is already running a very difficult administration needs is to have his vice president embroiled in a speculation and controversy that divert attention from the running of the government.

“However, it’s fair for Nigerians to speculate whether this is part of the ongoing fight between El-Rufai, Tinubu and Osinbajo himself.  You can’t wish away some of these speculations. It’s part of normal politics and governance. I wish the president will say something clearly and specifically to lay to rest some of these rather disturbing speculations. This is what he needs to do,” he said.

Buhari had in July said he would not name anybody as his successor. The president said: “Succession, to me this is very funny; because if I did find anybody I will create more problems for him or her. Let those who want to be president try as much as I did. “I believe those who are interested need to know that I tried three times and the fourth time I thank God and technology, PVC.