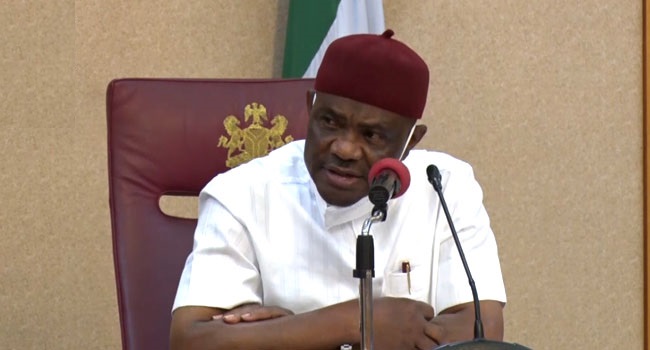 Apparently, Governor Nyesom Wike of Rivers State may have exploited the ambiguity inherent in the appeal court order to inaugurate a four-man Tax Appeal Commission on Friday in the state.

The governor inaugurating the commission,  mandated the members to promote a new culture of tax payment in the state and ensure that taxable persons and entities must comply with the relevant tax laws in the state without reservations.

Governor Wike, after swearing in the Rivers State Body of Tax Appeal Commissioners, at the Government House, in Port Harcourt, on Friday, highlighted the imperatives of taxation and payment of taxes in the country, appealing for the support of everyone within the tax bracket to enable governments perform their responsibilities.

The governor, therefore, encouraged chairman of the commission to collaborate with other members to ensure the achievement of their mandate.

Governor Wike highlighted: “No country can survive without taxes, no country.

“As you do all you can to rejig the government and the citizens to do what they are supposed to do, I have confidence that you will be able to reach your colleagues and members to do the right thing.

“Once again, let me congratulate you and believe that you have to kick-start immediately and get an appropriate office where you will commence from.”

Governor Wike signed the Valued Added Tax (VAT) Bill into law three weeks ago, including the prohibition of open grazing bill and three other laws passed by the Rivers State House of Assembly.

Justice Stephen Pam of the Federal High Court, Port Harcourt, Rivers State, had in a judgement declared that states should collect VAT, not the Federal Government.

The judgement was challenged at the Court of Appeal in Abuja. the appeal court on Friday ordered that all parties to the suit should maintain the status quo till the determination of the substantive appeal by FIRS.