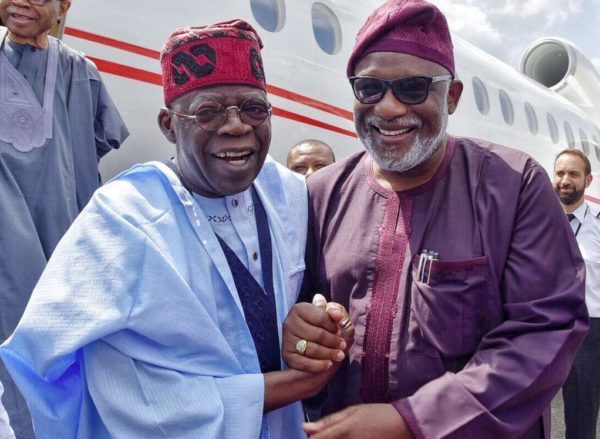 “You are a leader of leaders, a living legend” – Akeredolu eulogises Tinubu at 70.

Gov. Oluwarotimi Akeredolu of Ondo State on Tuesday rejoiced with the National Leader of the All Progressives Congress (APC), Asiwaju Bola Ahmed Tinubu, on his 70th birthday.

Akeredolu’s Chief Press Secretary, Mr Richard Olatunde, made this known in a statement issued in Akure.

He stated that Akeredolu hailed Asiwaju Tinubu’s resilience and commitment to creating standards in party politics and investments in political leadership.

“Jagaban, you remain a Leader of Leaders; a living legend bestriding our political firmament like a colossus.

“On this auspicious occasion of your 70th birthday, we salute your efforts and dedication to nation building and national development.

“You are a man of many parts with legendary contributions to the development of our dear country.

“Your human capital development is alluring just as you have made personal sacrifices and deployed your political experiences for the benefit of the country.

“Today, you are still standing tall, desirous to offer more.

Today, we celebrate your selfless service to the nation. We salute your doggedness and exemplary leadership.’’ Olatunde quoted Gov. Akeredolu as having said.

The governor prayed that the Almighty God would grant Asiwaju Tinubu, governor of Lagos State between 1999 and 2007 more strength and good health in the service to the nation, and that of humanity.

Share this on WhatsApp
Related Topics:Akeredolueulogisesleaderliving legendTinubu at 70
Up Next

What it takes for a driver to drive the BEAST