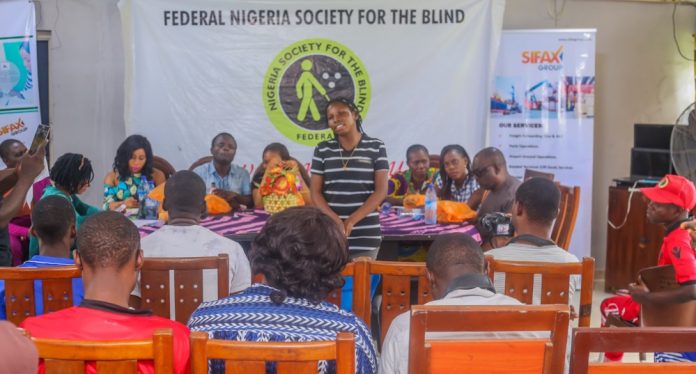 Recently, blind students of The federal Society For The Blind at Oshodi were all impacted through a community development project hosted by the Initiative For National Growth. The ING through its team of dedicated minds were able to put this together with the aid and support from the media, Lagos State Aids Control Agency, SIFAX group and a host of facilitators.

Mr. Nicholas Obot, Principal Head of the Federal Nigerian Society School for the Blind gave was happy to receive every one that honored the invites. And Public Speaker Trainer, Mrs. Omolara Daniel (who is the first visually impaired fellow to be selected for the Mandela Washington Program in 2016), was on ground to teach students on the basic inputs needed to develop a career in public speaking.

Also Mr. Ayoola Efunkoya, a visually impaired on-air personality from the Voice of Nigeria delivered training to the students on career development in mass communications. Mrs. Opeyemi Adewale, (also visually impaired) trained the students on psychology and depression. Given their current disability in sight, she exposed relevant tips needed for the caregivers and students to enable them overcome depression. National Daily Newspaper (Mr. Kingsley Ediale) was on ground to cover the event.

A representative from the Lagos State AIDS Control Agency, Dr. Omolola Sule, gave a speech on the vulnerability of HIV to people living with blindness and specific measures to prevent it. After her 20 minutes speech, she urged each of the caregivers, students, and guests representatives to undergo the HIV screening and consultation with 3 Text Counselors at the back of the conference room.

Dr. Ibrahim Oseni, the Health Practitioner for The Malaria Screening and Consultation (physically disabled), gave a 10 minutes talk on various ways to prevent malaria even as a person living with disabilities. Dr. Ibrahim and his team conducted series of tests on HIV and Malaria with the blind students, caregivers, facilitators and the some of the guests.

Fortunately, the report showed that no one was HIV positive. Moreover, Ayobami Idowu (visually impaired), gave training to the students and caregivers on the relevance of constructive mobility skills for blind students, methods on how to access their whereabouts even if they are not sighted, how to depend on themselves and not on others for mobility with their cane and becoming familiar with their immediate environments.

There was a mid-break, time for refreshments, as the YALI team served each student, caregivers, guests and facilitators food and drinks. While the refreshments went on, Mr. Okon Joseph, (visually impaired) a deputy director of the Federal Ministry of justice, provided a wonderful insight and training on the various Legal rights that people living with disabilities can utilize and he threw more light on disability laws for the blind.

Mrs. Chika Kama, a lawyer with Olympian Partners, gave training on adopting a career in law for the students, the majority of the blind students see the law as a vocal opportunity to express their rights and defend other people who live in disabilities.

Mrs. Christiana Akinrinmade also attended the event as a guest speaker. Christiana lost her sight 7 years ago and that forced her to quit her career in the banking sector after her 20years of service as she focused on entrepreneurship. She gave words of encouragements and motivations to the students. She spoke about dreams and goals for persons living with disabilities and urged students to take up their passion. She asked the students to not to attract pity but they should channel their energies towards having passion for that thing that can make them independent.

Amdi Salam also provided training on the day, teaching students on the importance of emotional intelligence for their career development. The lecture centered on the importance for the blind students to understand that people can leverage positively on their emotions to grant them support but they have to play their part in control of their relationships to their best advantage judiciously and empathetically.

The Young African Leaders Initiative also presented Awards to the executive director of Sifax Group, represented by Mr. Philips Ojo, for their massive contribution to the community development project in fostering Career development and Health Practices to the Federal Nigerian Society School for the Blind and the society at large.

Later in the open field, the event took another dimension as the blind students went on pitch to try some fitness activities as directed by the sport’s coach. Then music followed, administered by Tosin Oyebolu and Dele Isiaka.