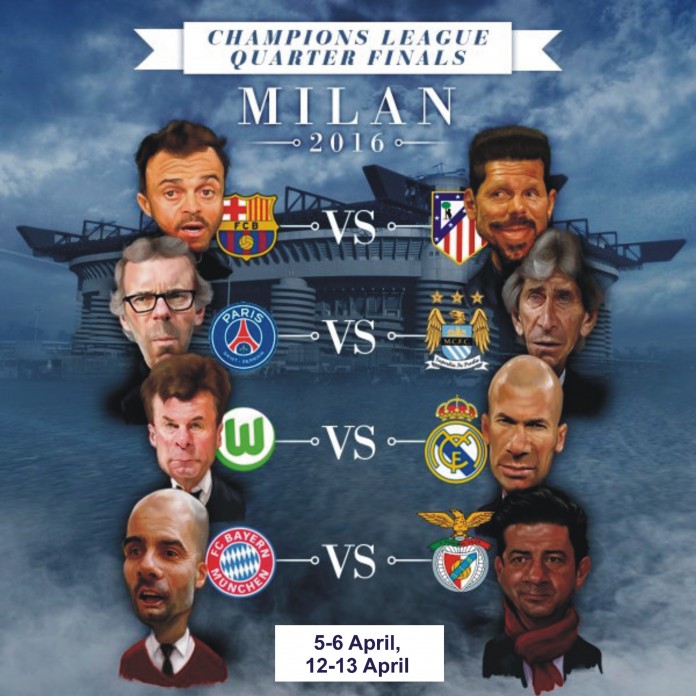 Wolfsburg vs Real Madrid
Last month Juventus coach Max Allegri talked about the role of luck in certain situations, using the line, “If you can’t be good, be lucky.” That might not apply to Real Madrid rookie coach Zinedine Zidane just yet, but there could be no better draw for him than Wolfsburg, which has never reached the quarterfinal stage of the competition before. Madrid under Zidane is a happier team than his predecessor Rafa Benitez, but not noticeably better; it racks up goals at home, and struggles away. “If you get Wolfsburg in the quarter-final of the Champions League, you’re thinking, ‘it’s almost a bye’,” said former Real Madrid forward Michael Owen this week. Wolfsburg coach Dieter Hecking will respectfully disagree, but will also need the likes of Julien Draxler, Max Kruse and Andre Schurrle on top form. The matchup might also be a chance for striker Nicklas Bendtner, no shrinking violet when it comes to his own opinion of himself, to finally play at the Santiago Bernabeu (that’s if he doesn’t oversleep, as he was fined for doing this week). Hecking will learn plenty from studying Madrid’s matches against Roma in the last round: Roma created more chances, but missed so many opportunities. If the Wolves can be more clinical, we could see a shock.
Tip to progress: Wolfsburg.

Bayern Munich v Benfica
Another Portuguese opponent for Pep Guardiola’s Bayern Munich at this stage of the competition: last season it lost the first-leg 3-1 at FC Porto, which kick-started an enormous row between Guardiola and club doctor Hans-Wilhelm Muller-Wohlfahrt. Bayern won the second leg 8-1. This Benfica side won’t cave in so easily after two dramatic late goals at Zenit St. Petersburg saw it through. Still, the omens are good for Bayern, which beat Benfica 5-1 in the 1976 edition, before going on to win the competition. After its scare against Juventus in the last round, Bayern will feel more confident this time around although striker Robert Lewandowski has already warned against complacency, saying: “There are no easy teams at this stage!” He may be right, but Benfica is not as strong as Juventus. If Bayern gets its approach right, then Guardiola can look forward to another Champions League semi-final, which would be his seventh in as many years as a coach. Regardless of whether he wins it this year with Bayern or not, that is some achievement. Tip to progress: Bayern Munich

Barcelona v Atlético Madrid
Atlético Madrid coach Diego Simeone has got the better of most coaches during his highly successful spell in the Spanish capital. The highlight was drawing with Barcelona on the final day of the 2014 season to win La Liga. Earlier that season, Atlético beat Barcelona 2-1 on aggregate in the Champions League quarter-final yes, this very stage again on its way to the final. Since then, though, Luis Enrique has come in as Barcelona coach and seized the upper hand, in a major way. The pair has faced off six times in the last two years and Barcelona has won all six games.
The most recent was in January, with Barcelona’s 2-1 win giving it the advantage in the title race.Atlético has had some tough draws at this stage of the competition last season it was Real Madrid and once again its luck ran out. That’s not to say Barcelona will be overjoyed by the draw; after Bayern, it probably wanted to avoid Atlético before Real Madrid. The first leg comes three days after El Clasico and it could be a season-defining week for Barcelona, which is bidding to become the first to win back-to-back European Cups in the Champions League era. It will have to do it the hard way.
Tip to progress: Barcelona

Manchester City v PSG
Just as Manchester City’s name was coming out of the bowl, Belgium coach Marc Wilmots was giving an injury update about City captain Vincent Kompany. He will be out for about eight weeks, which means he will miss both matches against the already-crowned French champion. City is in new territory at this stage of the competition while PSG has never reached the final four. PSG was clinical in beating Chelsea home and away in the last round, with Angel di Maria and Zlatan Ibrahimovic combining particularly well. Add the fact that Marco Verratti, who adds so much in the midfield alongside Thiago Motta, should be fit again and you would put PSG as slight favorite.The good news for City is that Kevin de Bruyne might be fit by early April, and if his previous form in this competition this season is anything to go by, he could make a huge difference to City. It seemed inevitable that City would end up meeting Bayern Munich at some point this season but it would have to achieve the best result of Manuel Pellegrini’s reign at City to make it happen.