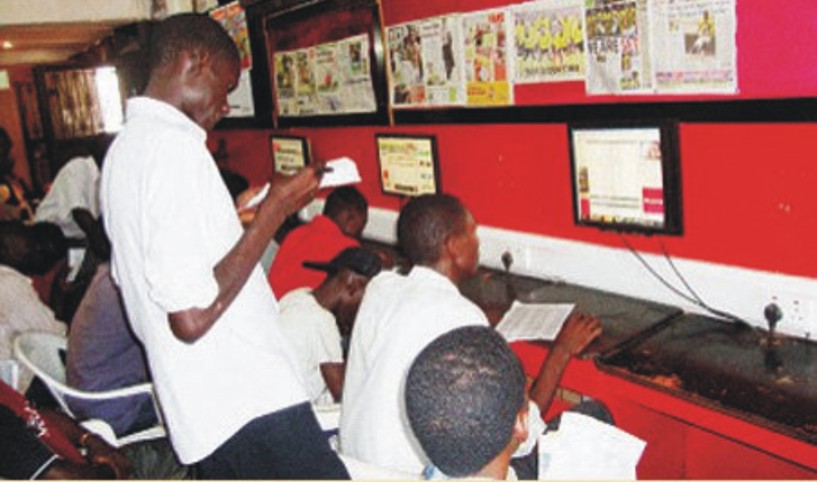 Nigerians have taken to sport betting and the fast pace at which new sports betting companies are emerging is alarming as well as it is welcoming. Many are of the opinion that it is a good thing for youths to keep themselves economically busy. EDIALE KINGSLEY writes, as loosers, winners and sport bet company owners talks.

IN 2014, we were all shocked to know that about 60 million Nigerians between 18 and 40 years of age spend up to N1.8 billion on sports betting daily according to News Agency of Nigeria (NAN) investigation.

On why the bet business is expanding so fast, General Manager of one of Nigeria’s biggest betting company SureBet247, Ajala Adeyinka Samson in a media conference says, “I think that first and foremost, this country has been receptive of the benefits that technology can afford us. Like we all know, betting has been in existence in advanced countries for many years and we also are trying to emulate what’s happening in the other parts of the world.

It is no longer a joke that you can barely survive, especially in countries like Kenya for instance, there’s practically nothing you can do without your phone, everything is becoming “e-“, there’s nothing you can’t do on your phone now you’re sending money, you’re pushing emails, all sorts of things. You can even have meetings with people in different parts of the world. It is the same technology, it is the same idea that has been brought to betting to make it easier. In terms of collaboration with other industries like banking for instance, from the push of a button you can get money paid; winnings paid to any agent across the country. And so generally, it is simply because we are always open to the developments in the world, we’re trying to catch up with what is happening elsewhere.

National Daily Sports asked Mr Ajala about how big the industry was and what the potential is if any. Though he as expected, did not brandish any numbers, he very well described just what the potential is out there for this industry, “Well, I will like to call it an emerging market but even as an emerging market I think that this industry is so big and can only get better. So far there’s been a bit of concentration on the cities, the metropolis. But you will realize that there are other places, places I will like to refer to as interior. We still have places where there are a lot of people, places where five, seven, ten people will gather money and give to a person to go to the nearest town and place bets for them, it happens a lot. So that is why I will call it an emerging market, the potential is huge. What we contribute to the economy is massive. For instance, as far as retail betting is concerned, you have to get a shop, carpenters work in your shop, the painters also, people that sell paper rolls, different workmen are needed, landlords are making money, agents, etc. So if you look at what this is bringing generally, you will realize a lot of the youths who either might have been committing crime have been taken out of the streets. Now with 100 naira you have hope that something better can happen. I have seen a lot people who come here to collect cheques seven million, nine million naira and much more than that with bets of 200 naira. So this is giving people hope. And especially for the fact that when they win, they get the money, it stimulates them.”

Speaking to Gbenga Olorunpomi, a social commentator and the newly appointed Special Assistant on Media matters to Kwara State Government, on the rate at which youths embrace gambling and betting in the country. He had this to say, “Football is part of the Nigeria culture. For the love of the game and the EPls, Laligas…Youths have also find a way of using technology to make extra cash “.

The Good:
We can’t forget the news about the computer Engineering professor from the Ambrose Alli University, Ekpoma, who won the humongous amount of N58, 945, 553 with just a N800 total bet on 1960BET. Prof Godwin Ighalo revealed that he has been placing bets for over 25 years but he always believed that one day, ‘luck would shine on me’.

Saheed Oniloyi and his friend Olashile Ali also have good things to say about this new sport called betting. The duo never bargained to be millionaires overnight. Not quite long they went to a betting outfit called Bet9ja, to predict the outcome of some Europa League and Italian Football League matches to be played that day. They put a stake of N400 on the outcome of the matches they selected. Luckily, they correctly predicted the outcome of the matches, and won a jackpot of N8milion.

During the presentation of the cheque to the friends by the General Manager of the Betting outfit, the duo were excited and short of words. Oniloye finally broke the silence and said: “We were praying that our ticket should seal, suddenly, someone beckoned on us that the game on our ticket had sealed. We thought he was lying, until we logged on to the net and confirmed that it was true. We are really happy because we never thought we could become millionaires”, he said.

Ali on the other hand described the winning as a miracle and luck “I am really surprised and delighted, because we just selected the matches. We really thank God for this. We prayed that our predictions should come to reality and God answered our prayers”.

The professor and duo are just among thousands of Nigerians who are now addicted to betting by predicting football matches which are being played all around the world.

The Bad:
Francis Akobi, 29, is an accountant by training. He got his Higher Diploma certificate from the prestigious Auchi Polytechnic. All his years in school and money that went into his academic pursuit is about to amount to nothing. He blames his misfortune on Soccer betting as he walks in handcuff into Ogbudu police station.

National Daily Investigation uncovered facts from the inspector in charge of Francis’ case. Facts which tell the story of how Francis lavishly spent 300 thousand naira belonging to the company he was working for as accountant. In a bit of applying the rob-peter-pay-paul-syndrome, he went into sport betting. He was able to stake and win up to 500 thousand naira at the early stages of the habit, but he sooner ran out of luck and began losing big stakes until he got himself into a loss and debt of N1.3M.

You may also recall the National Daily report on a case involving Adio Iseoluwa and Dare Fawunmi, who were arraigned before an Ebute Meta Magistrate’s Court for allegedly stealing a N130, 000 winning lottery ticket. They were arrested at the Surulere Lagos head office of Premier Lotto Nigeria Limited, popularly referred to as Baba Ijebu. National Daily learnt and reported that the duo sneaked into the office around 7.30am on 21 September, 2013 to perpetrate the theft, before they were caught by security officials. They were said to have also stolen an additional N100, 000. They were arraigned on two counts of stealing. Adio and Fawunmi both pleaded not guilty. The magistrate, Mr. O.O Olatunji, granted them bail in the sum of N100, 000 with two sureties each in like sum. The matter was adjourned till October 16 for further hearing.

Baba Ijebu Repackaged:
The betting business which is synonymous to pool betting which has been in existence over the years has been able to modernize the business through the use of internet facilities. This has made numerous youths and their older counterpart to patronize the betting outfit with the aim of making money.

Muyiwa Oyeniyi, an agent of the premier lotto disclosed that most youths that were patronizing him have delved into the betting game which is affecting his business: “It is not that customers are not coming, but they have reduced drastically. Most of them believe that there is more money in the prediction of football matches than permutation of numbers”, he said.

Another agent revealed that most of his customers delved into the betting games because they have access to internet in which they are able to monitor football matches, either on their phones or by watching them live on television.

From streets to streets, mainly on the Mainland area of Lagos state, betting outfits are located almost everywhere with youths struggling to gain entrance into the offices of these betting companies to get tickets for the prediction of matches. Both illiterate and literate, old and young, people who have football ideas and those that do not have, all throng to these places just to predict matches with the aim winning.

The emergence of the betting outfits has increased and boosts business for operators of viewing centers across the nation and as well increased viewers at viewing stations and also at cyber cafes for people who do not have internet facilities on their phone.

Junior Njoku, a regular caller at one of the betting outfits stated that he has on several occasions won certain amount of money in predicting the outcome of some matches which has helped him solve financial problems. The University of Ilorin undergraduate stated that he prefers putting his money on the prediction of matches, than playing the Premier Lotto which is not certain: “It is easy to win money through prediction of matches, because you are used to these teams and you know their ability, which helps in predicting, unlike ‘Baba Ijebu’ where you can give yourself heartache”, he said.

Samuel Amisu, revealed that the betting game is better than the premier lotto, because you don’t need to calculate unnecessarily: “It is easy to play, and you can see the way your money is going. Though football is unpredictable, but you can easily look at the strength and weakness of a team to ascertain who wins, unlike the Premier Lotto where a figure can mar your chance”.

It pains me to the marrow when I see leaders of tomorrow throng to play Baba Ijebu and bet to predict football matches. I weep because I know the future of Nigeria is in shambles”.

Lucy Oyebode, a journalist, said many prominent personalities around the world are battling to put their life back on track after losing their lives savings to gambling and online bettings: “Many Nigerians have sold their belongings to playing Baba Ijebu. I know of a motorcyclist that sold his properties because he was addicted to gambling. It is so sad that our youths who are the future of the nation have seen this as a route to bid poverty farewell, which is an illusion”, she stated.