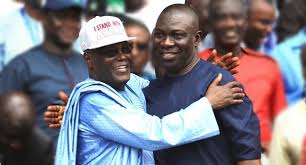 The presidential candidate of the Peoples Democratic Party (PDP), Atiku Abubakar, after the visit of Deputy Senate President, Ike Ekweremadu, and three PDP governors from the South East to President Muhammadu Buhari at the Presidential Villa, Abuja, renewed his negotiations with Ekweremadu in an effort to pacify him over the choice of Peter Obi for Vice President.

Ekweremadu had since the choice of Obi for VP, made several abnormal moves that raised suspicions of his dumping the PDP or working for the ruling All Progressives Congress (APC).    Atiku had endeavoured to persuade Ekweremadu that Obi was chosen in the interest of the zone, in particular, and the country, in general, considering that Peter Obi does not have any corruption case against him and does not belong to any faction of the party.

It was gathered that PDP has fixed its National Executive Committee meeting for Thursday in Abuja to approve the full composition of the council and also vet its budget for the campaigns.