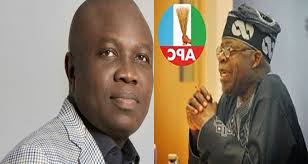 Lagos Governor Akinwunmi Ambode has stepped into a political storm in his on-going stabd-off with the strong man of southwest politics Band APC leader Bola Tinubu.

Gov. Ambode, who bought his nomination form for a second term, may therefore soon be impeached.

No fewer than 57 local government areas in Lagos have been mobilised against his election, according to The Cable News.

The online newspaper reported on Tuesday that 57 council chairmen loyal to Tinubu, have met and pledged their support to his preferred candidate Jide Sanwo-Olu.

Sanwo-Olu and Obafemi Hamzat will be slufgging it out with the governor in the primary election.

Tinubu has got a good hold on the LGAs in the state, being the strongest support base which also determines who wins going by the direct primary election the APC just introduced.

“Meeting is over. Ambode is out. Jide Sanwo-Olu is the new governor of Lagos. All 57 local government chairmen have signed his form. It’s over,” the newspaper was quoting a source as saying.

Another source and associate of Tinubu Tinubu, James Odunmbaku, was also quoted as saying, “Sanwo-Olu is the incoming governor of Lagos.”