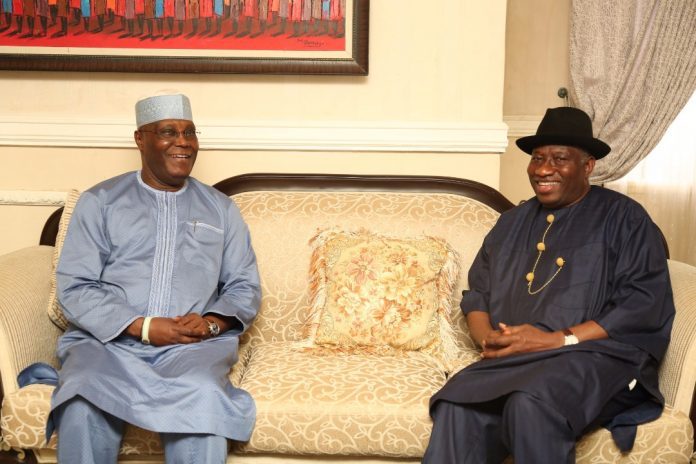 Except we want to continue to deceive ourselves, the north-south relations in this country are defined by mutual incomprehension and the current jostling for the presidential ticket of both the ruling All progressive Congress(APC) and the opposition Peoples Democratic Party (PDP) underscores the awkwardness.

In the last few days, the media has been awash with news of a Fulani group that purportedly purchased Presidential Nomination and Expression of Interest forms of the All Progressives Congress (APC), in the name of former President, Dr Goodluck Jonathan.

In a statement issued on Monday night by Ikechukwu Eze, his spokesman, the former president said he didn’t authorise the purchase.

“It has come to our notice that a group has purportedly purchased Presidential Nomination and Expression of Interest forms of the All Progressives Congress, APC, in the name of former President Dr. Goodluck Ebele Jonathan,” the statement read, adding that “we wish to categorically state that Dr. Jonathan was not aware of this bid and did not authorise it.”

As said in the statement, “buying a presidential aspiration form in the name of Dr. Jonathan without his consent, knowing the position he had held in this country, is considered an outright insult to his person.”

But that obviously is not how the story will end because already there are conflicting drumbeats from some quarters including Jonathan’s.

First it was reported that Miyetti Allah Cattle Breeders Association of Nigeria (MACBAN) was responsible for the purchase of the form for Jonathan only for the Fulani group to come out in less than 24 hours to deny purchasing any form for Jonathan.

Several questions need to be answered to help us deconstruct this mischief and factor it into other ongoing schemes in the political circle. There seem to be a deliberate agenda to muddle up things and ultimately cause crisis in some sections of the country currently clamouring to be given the chance to produce Buhari’s successor.

Has Jonathan announced his defection to the APC or rather is he intending to defect to the ruling party? And which one comes first: collection of presidential expression of interest form before defecting to the party or the other way round?

However, reading in-between the lines, it was glaring that what the former president disputed in the statement by his media aide was the idea of some groups buying the form without his consent and not whether he is defecting to run under the APC.

As said by the statement from the former president’s media aide, “We want to state that if the former President wanted to contest an election, he would make his intentions clear to the public and will not enter through the back door.”

The question is: why did the former president visit the Chairman of the ruling APC and had a closed door meeting with him. What was discussed in that meeting remains a secret till today.

Now here is the real gist: In 2020, some hyenas in the corridors of power enticed Jonathan with a putrid idea of defecting to APC and running as the party’s flagbearer. Jonathan fell for it hook, line and sinker and since then has been looking for ways to manoeuvre his way around the indecent proposal.

Recall the project of a fugitive in London who sponsored a rented crowd of jobless folks who came to beg Jonathan to defect to the APC and run for the Presidency in 2023.

We still remember vividly that Bros told them he was still considering the idea of defecting and running. So the whisper has been on since last year and yet he did not do anything to deny or accept it as it spread.

As the primaries approached, this group convincingly believe that Jonathan is the perfect tool needed to sabotage the power rotation to the South as he won’t get more than 4 years since he has done one full term previously and above all he can be grossly manipulated to achieve their aims after all they did it before when he was in-charge. This group want Jonathan to show courage by defecting first but bros wants firm assurance beyond the noise.

The only problem the group has is that the President, Gen Mohammadu Buhari has remained non committal to the proposal till this day. So the only missing piece in the jigsaw remains Buhari’s express guarantee and promise to anoint the APC presidential flagbearer in what has come to be tagged “the anointing that breaks every yoke”.

Did the Fulani group buy the APC expression of interest and nomination form in the name of Goodluck Jonathan? Yes they did!

How could anybody explain that Jonathan after what he went through in the hands of these same people will exhibit such blinding selfishness, mind bending greed and, crippling shortsightedness?

The former President appears to have caught in the bait of the schemers, who appear adamant on leading him on another self-inflicted political misadventure and ultimate defeat at the presidential primary of the APC.

Why is it difficult for the former president to decode that the scheme to bring him back to Aso Rock is designed to completely humiliate and destroy him and ultimately mess up the hard earning international reputation since he conceded the 2015 presidential election to General Buhari.

Without mincing words, some of these people that now call themselves your admirers, like Nigerian Young Professionals in Diaspora (NYPD), and other self- centred admirers that are giving you ultimatum to declare your presidential bid, are nothing but sponsored crowd? Bros you suppose know more than this!

If these same people did not believe in your ability and capacity to address some of the challenges the nation faced when you held sway as the ombudsman, is it now that the nation’s problems have become unimaginable that they believe you’re the only messiah to rescue Nigeria?

Is it not far better, more honourable and prestigious flaunting your credentials as a statesman of global reckoning than dragging yourself in the dirty murky waters of partisan politics especially with this conscription of Angry Peoples Congress?

As things stand, most southern politicians can see the sectional machination behind the sponsored lobby to have President Jonathan back. And it will be vehemently resisted by APC aspirants from that section of the country despite the fact that they have all signed withdrawal of interest bond even before the primaries.

Whether anybody wants to hear this or not, what is happening in APC including dragging Jonathan sheepishly into it all is a scheme to deliberately distract and disorganise a section of the country. So it’s obvious now that it’s either Jonathan or a northern candidate will be produced to take over from Gen Buhari. Mark my word!