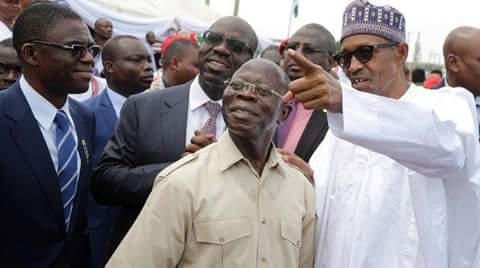 The Benin Central hospital was first built in 1902 with only 10 beds.

This is his third time of visiting the state to commission projects.

Buhari noted that the hospital is the best legacy Governor Oshiomhole would be bequeathing to the people of the state.

He said he was impressed with the hospital project as according to him, “it takes a lot of courage for the Governor to do what he did.”

“I am impressed with the work. This is the best thing Oshiomhole can do for the people. When I was coming, I asked the governor, “Whose edifice is this?”

President Buhari stated that many elite would prefer to build a more comfortable environment for themselves but Oshiomhole opted to build a hospital that would benefit the people.

Governor Oshiomhole in his remark said the only way to show equality among men was for government to provide facilities for both the rich and the poor.

Oshiomhole noted that successive administration had patched the central hospital but he decided to build the hospital instead of erecting a new government house.

He noted the hospital was built following his conviction that public health care facilities should not be inferior to private health facilities.

According to him, “I almost wept when I first visited this hospital. What I found here was shocking and I concluded that even if a healthy man visited the hospital, the healthy would be admitted the next day.”

“This hospital is fitted with the latest technology in health care delivery. This hospital will not be run as public service.

“We will make that efforts to work are rewarded and not for those that want to embark on strike.”