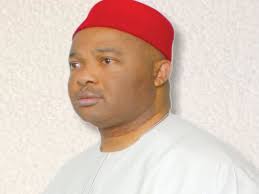 Share this on WhatsApp
Spread the love
Alex Olise
A Kubwa Grade 1 Area Court, Abuja, on Tuesday issued a bench warrant for the arrest of  Senator Hope Uzodinma, accused of issuing N200 million dud cheque.‎
Uzodinma,  a serving senator representing Imo-West, Smiec Engineering and Chemical Construction Company, Niger Global Engineering and Technical Company, were charged with alleged issuance of N200 million dud cheque to Chitex Ventures and Chima Akuzie.
The judge, Mr Abdulwahab Mohammed, said the defendant was absent on the last adjourned date of  September 11, but his counsel, Eze Oguaju promised to make him available today, September18.
Mohammed issued a bench warrant against the defendant and entered a plea of not guilty for the other defendants, relying on Section 478 of the Administration of Criminal Justice Act.
The section provides that a court shall order a plea of not guilty ‎to be entered and the trial shall proceed as though the corporation involved had duly entered a plea of not guilty.‎
The judge adjourned the matter until September 25 for hearing.‎
‎‎Chitex Ventures Ltd and Chima Akuzie, the complainants, had made a Direct Criminal Complaint against the defendants over alleged issuance of a UBA N200 million dud cheque.
The complainant’s counsel, Oluwatosin Ojaomo, had earlier urged the court to invoke the provisions of Section 131 of the ACJA against the defendant, by issuing a warrant of arrest against the defendant.‎
He further stated that the defendants were absent in court in spite the fact that they were aware of today’s date, September 18 fixed for definite arraignment.‎
Share this on WhatsApp