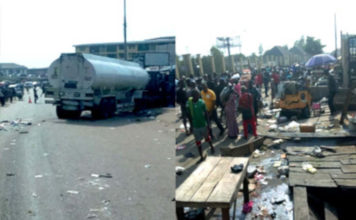 No fewer than 20 people were, yesterday afternoon, crushed to death by a tanker laden with kerosene at Upper Iweka Onitsha, Anambra State, with scores reportedly injured.

Also yesterday, six people were crushed at Ibughubu Market, Umuchu, in Aguata local government area of the state in an accident involving a truck loaded with cement and a lorry with property worth millions of naira destroyed.

According to an eye witness, the kerosene tanker driver drove through the service lane at Upper Iweka Onitsha where he reportedly lost control around Adam and Eve Motors and crushed many traders and vehicles in the process.

It was hectic time for emergency respondents, the Police, Federal Road Safety Corps, Onitsha and Anambra State Traffic Agency and Willie’s Work Force, WWF, to evacuate dead victims and those with injuries, including the affected vehicles from the road.

Eyewitnesses said the victims might be more considering the distance where the tanker lost control and where it was halted as many people and vehicles were dragged while descending the ever busy Service Lane at Upper Iweka where over forty different transport companies are located.

Many body parts and blood of the victims were seen along the road the tanker drove through before it finally stopped at the public toilet building located at Upper Iweka.

A Toyota Siena belonging to Onitsha South Transport Company that was discharging passengers on arrival from Enugu was one of the vehicles crushed with the passengers.

The State Chairman of the Nigerian Red Cross Society, NRCS, Prof. Peter Katchy, speaking with newsmen at the scene, disclosed that the bodies of the deceased persons had been deposited at a hospital morgue, while three persons, who sustained serious injuries, were rushed to Pieta Specialist Hospital and Toronto Hospital. Katchy added that one of the dead persons in his 30s lost his head completely and was lying headless at the compound of the hospital.

However, at about 5.58p.m., Toronto Hospital, more than 200 sympathisers were gathered in the compound, trying to catch a glimpse of the dead and survived victims. Doctors and nurses in the hospital were busy running round to save the lives of the surviving victims. Medical Director of Toronto Hospital, Prince Emeka Eze, who was away in the United Kingdom, UK, was also heard instructing the doctors and nurses not to ask for any deposit from the victims, but to save lives first. He also ordered for immediate blood transfusion for the surviving victims who may have lost blood in the accident.

Matron of the hospital, Ijeoma Ogegbulam, while speaking said 10 people were deposited in the hospital morgue, and out of the ten, two died at the emergency theatre due to excessive loss of blood, while eight died at the scene of the accident before they were brought to the hospital. Ogomegbulam said seven surviving victims, four female and three male are currently on admission in the hospital, adding that their chances of survival were very bright.

When the Police Public Relations Officer, Anambra State Police Command, Mr. Mohammed Haruna, was called at about 6.20p.m. yesterday, his phone indicated that it was switched off.

The DPO of Central Police Station, Onitsha, Mr. Ifeanyi Ibru was too exhausted to speak to newsmen when he was approached for comment at the scene and at Toronto Hospital when he led his men to visit the survivors of the accident. … 6 at Ibughubu Also yesterday, the accident involving a truck loaded with cement and a lorry at Ibughubu Market, Umuchu, in Aguata local government area of Anambra State reportedly claimed the lives of six people with property worth millions of naira destroyed.

It was gathered that the drivers of the vehicles died in the accident alongside four other persons, while scores of people, mainly traders and a conductor of one of the vehicles sustained various degrees of injury. One of the victims was Mr Aaron Ononuju, 65 years from Umuchu.

An eyewitness, Mr Joshua Agbasiri told Vanguard that the two trucks collided before they rammed into the market stalls, causing pandemonium in the area.

“The truck carrying cement was in a high speed and apparently due to brake failure, it pushed the tipper to the opposite side of the market where it destroyed shops and inflicted injuries on some shop owners,” he said.

The chairman of Ubughubu Village, Mr Titus Ike, said three shops belonging to one Okwudili Egbobuike and Nonso Ezekwelu, were most affected. He said:

“Nonso’s shop was worse because he and his mother became victims. There are other people I don’t have their details because I have not been to the hospital where the bodies were deposited.

“We are going to install speed breaker on this road because we are tired of this re-occurring accidents. This place is a valley, especially the market area.