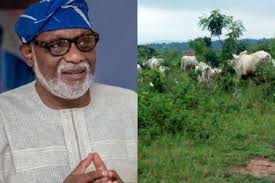 Reactions have continued to trail the recent ultimatum by Governor Rotimi Akeredolu of Ondo state that Fulani herdsmen living inside the state’s forest reserves should vacate the place before seven days.

The governor, in the directive which has generated controversy, also banned under-aged grazing, night grazing, movement of cattle within the cities and highways.

The presidency had in a statement issued on Tuesday night by the Senior Special Assistant on Media and Publicity to the President, Garba Shehu, kicked against the ultimatum given to herdsmen to vacate the Ondo forest reserves by the state government.

While the presidency has called for restraint on the side of the state government and the Fulani communities, some Yoruba elders have backed the directive of Governor, Rotimi Akeredolu.

The elders, under the aegis of Coalition of Oduduwa Elders, warned the Presidency to steer clear of governance issues in Ondo or any other state in the country, saying the governor’s action was in protecting the lives of Ondo citizens.

They noted that the federal government which has exclusive control of conventional security architecture in the country, had failed to protect the people.

In a statement by its National Coordinator, Dr Tunde Aremu and National Secretary, Barr. Mrs Folake Ajasin, the elders asked the governor not to be distracted by actions of those they said have failed to safeguard the lives of Nigerians but to be firm and decisive in his actions aimed at giving Ondo people safety.

Noting that the governor, as a lawyer whose versatility in the law field had taken him to the pinnacle of the profession, would not do anything outside the nation’s law.

In a statement issued by its spokesman, Yinka Odumakin, Afenifere urged “all true- born” Yorubas and governors in the South-West to stand behind Akeredolu.

“The fact the Federal Government could only hear Ondo State when Governor Akeredolu was very loud and clear about herders to vacate forest reserves in the state is symptomatic that this government has a serious problem with heating the rest of us when the issue involves its anointed Fulanis.

“The Fulani criminals have caused untold hardships in Ondo State and other Yoruba towns and cities in recent time and only an irresponsible government that wants to behave like our Federal Government will continue to fold its arms.

“The lives of our people and other non-Fulani communities are daily being taken by local and foreign Fulani bandits without any sign that these lives matter to the government with its desire to shield the Fulani from the laws.

But in his own reaction, a former Kaduna Central Senator, Shehu Sani, faulted the quit notice issued to herdsmen by the Ondo State Governor, Rotimi Akeredolu, describing it as being wrong.

He urged the Ondo state governor, Rotimi Akeredolu to think otherwise on his decision ordering herdsmen to vacate forest reserves in the state.

The former senator in a short message to the governor on his official Facebook page said it is wrong to ask all cattle herders to leave the state while they have the right to live anywhere they want in the country.