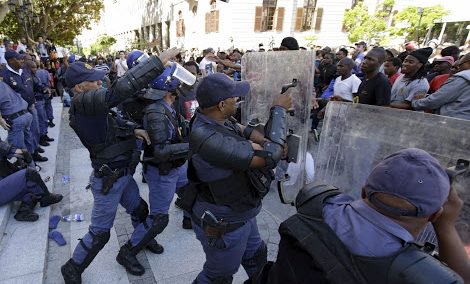 Barely a week after a Nigerian, Jelili Omoyele, was killed in Johannesburg over an alleged 300 rand (about N7, 500) parking lot debt, another Nigerian has been killed during raid in Vaal near Johannesburg in South Africa.

Steve Lumbwe, a Congolese, was a flat-mate of Ibrahim Badmus, the deceased, said he was handcuffed and was spray with pepper. “I asked the police ‘why are you doing this to him’? They said he’s a drug dealer, he must take out the drug and I was like ‘no, he doesn’t sell drugs’.

“I started fighting with them and tried to help the guy but the other one (police officer) took me out as well.

“So when I went back inside, Omo was sleeping, looking at them and the police officers were like ‘he just fainted’ that they would call the ambulance.”

“Information at our disposal said that the deceased was killed by a South African police officer,” he said. I led a delegation from the mission to visit the scene on receipt of the information. When we arrived the scene, the place was tensed up because Nigerians there were not happy.”

Adama said that the mission intervened and calmed the situation.

“We immediately met with the station commander in the area with some selected Nigerians. The police assured that a thorough investigation would be carried out.

“The investigation will be done by the Independent Police Investigating Department.”

According to the Nigerian envoy, an autopsy will be carried out while investigation on the killing is on.

$1.5bn loot: Why Diezani prefers to be tried in Nigeria