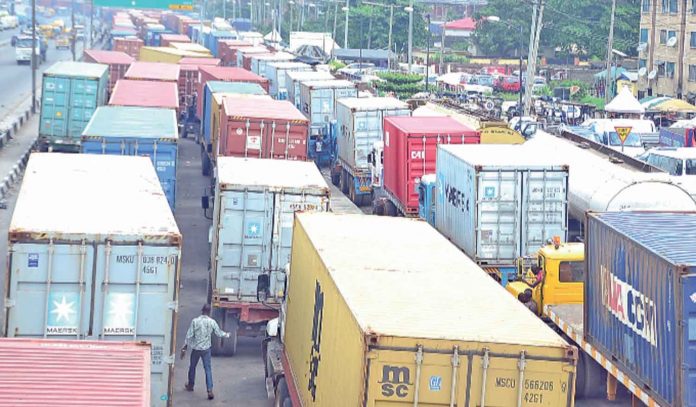 The cost of doing business in Nigeria is rapidly getting out of proportion. The creative gridlock at the Apapa and Tin Can Ports in Lagos State has continued to shoot up the cost of moving consignments from the port to the respective destinations across the country. As at December 2020, transport operators at the Lagos seaport charge N1.6 million to convey one container from the Apapa Port to Lagos Mainland. The transporters who operate with open and covered body trailers, claim that they spend about N300,000 per trailer to gain access to the port for loading. Operatives of the Presidential Task Force on the Apapa Gridlock which is chaired by Vice President Yemi Osinbajo, were alleged to be collecting between N100,000 and N200,000 per truck before loading access was granted. Other stakeholders alleged to include thugs, NPA staff, etc, were alleged to have imposed levy of between N20,000 and N50,000 at several other points on the access route to the seaport.

Financial Times of London in a report on Monday decried that it now costs $4,000 to move containers from the Lagos seaport to the Mainland. The publication further indicated that the cost of moving containers within Nigeria from the Lagos Port has become an equivalent or even higher than the cost of shipping the consignment from China to Lagos Port, Nigeria.

Businesses are at the receiving ends of these financial illicit deals at the Lagos port.

Several stakeholders who include transport unions and associations, and the Presidential Task Force, which comprises the Police, LASTMA, FRSC, etc., have been at loggerheads at different times over the cost of accessing the port by transporters.

Lagos State Government has said it would take over the management of traffic in the Apapa Area of the state from the Presidential Task Force Team.

Meanwhile, Governor Babajide Sanwo-Olu of Lagos State was on fact-finding visit to the Apapa port on Monday for assessment of the gridlock. The Monday fact-finding visit was the fourth being made by the Lagos governor to assess the crisis of traffic congestion on the routes to the Lagos seaport.

The Managing Director of the Nigerian Ports Authority (NPA) had earlier said that the NPA does not have the duty to control Apapa traffic, saying that it is the duty of the Lagos State government. Governor Sanwo-Olu, however, said that the Lagos State government would take over the traffic control of the Apapa port, disclosing his willingness to meet with the management of the NPA.

“Our plan is to bring about a cohesive system where all stakeholders would understand their roles and resolve challenges being encountered. Since last year, the Presidential Taskforce has been working on this issue.

“Now, there is a process that is starting in which the State Government is taking over the task force.

“We will have a team of policemen and LASTMA dedicated to Apapa Ports for enforcement of task force’s mandates.”