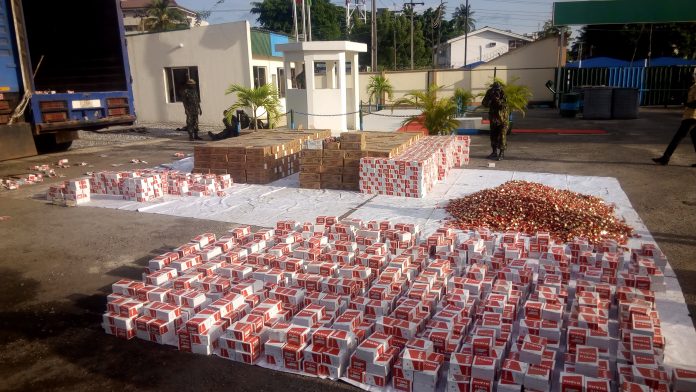 Troops of the Nigerian Army made an unprecedented interception of over 300,000 cartridges of ammunition at Igbogila-Ilara road,  village, a border town in Ogun state on Wednesday.

The syndicates, who were sad to be conveying the contraband well concealed with metallic plates in three trunks, were allegedly bringing it from neighbouring country.

They were said to have taken to their heels when they were stopped for routine checks by the army personnel from the 35 Artillery Brigade, Alamala Barracks, Ogun State in conjunction with men of the Nigerian Police, Department of State Security (DSS), Nigerian Security and Civil Defence Corps (NSCDC).

Explaining how the cartridges were intercepted even though no arrest was made, the 35 Brigade Commander,  Brig Gen Olusegun Olaniyi Olatunde said the ammunition were intercepted after an intelligence reports.

According to Brig Gen Olatunde, who stood in for the General Officer Commanding (GOC) 81 Division, Maj Gen Enobong Udoh, further gave analysis of how the ammunitions were intercepted.

“Following a tip off we received from well-meaning Nigerians during Anti-Illegal Bunkering, Anti-Pipeline Vandalism and Anti-smuggling  patrols, on 30 May 2018 at about 2:58am, troops of 81 Division Nigerian Army in conjunction with The Nigeria Police, Department of State Security, Nigerian Security and Civil Defence Corps intercepted

“The live cartridges in boxes and cartoons were carefully concealed and sealed in a false-based made up of wooden platform with metallic plates.

“The drivers and their crew on sighting troops abandoned their trucks and fled. A Team is on the trail of the fleeing drivers, their crew, corroborators and sponsors as investigation is on going.

The GOC, however, thanked Lagos and Ogun states residents for their continued cooperation and urges them to always give timely information, pledging not to relent until the area is rid of all forms of cultism, smuggling, vandalism and other violent criminal activities and elements.