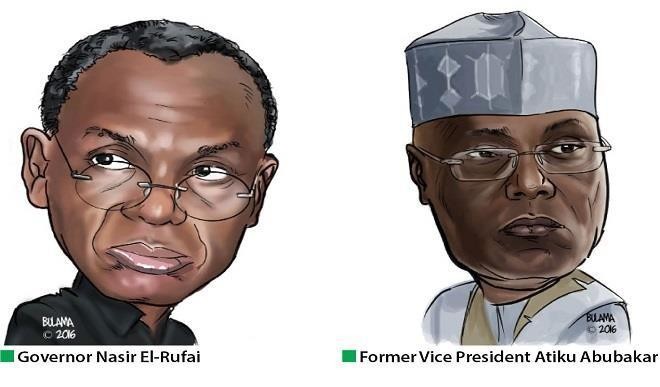 Nasir El-Rufai, governor of Kaduna state, has dismissed the fears that the exit of  Atiku Abubakar from the ruling All Progressives Congress (APC) might threaten President Muhammadu Buhari’s re-election in 2019.

El-Rufai disclosed this on Friday while reacting to Atiku’s decision to dump the ruling All Progressives Congress (APC).

He described Atiku as “a serial defector and presidential aspirant”, adding no governor will leave the party with him.

Recall that Atiku Abubakar, a former vice-president of Nigeria, resigned from the ruling All Progressives Congress, a move that further confirms his determination to contest the presidency in 2019. In his resignation statement, Atiku hinged his decision majorly on his neglect by the party and its government.

In a statement released on Friday, Atiku cited a memo Governor El-Rufai wrote to the President Muhammadu Buhari, pointing out a drift in the party.

In the statement, Atiku said: “Only last year, a governor produced by the party wrote a secret memorandum to the president … that the All Progressives Congress had “not only failed to manage expectations of a populace that expected overnight ‘change’ but has failed to deliver even mundane matters of governance”.

ALSO SEE: How Nigerians reacted to Atiku’s resignation from APC

“Of the party itself, that same governor said “Mr. President, Sir Your relationship with the national leadership of the party, both the formal (NWC) and informal (Asiwaju Bola Tinubu, Atiku Abubakar, Rabiu Musa Kwankwaso), and former Governors of ANPP, PDP (that joined us) and ACN, is perceived by most observers to be at best frosty.

Many of them are aggrieved due to what they consider total absence of consultations with them on your part and those you have assigned such duties.”

“Since that memorandum was written up until today, nothing has been done to reverse the treatment meted out to those of us invited to join the All Progressives Congress on the strength of a promise that has proven to be false. If anything, those behaviours have actually worsened.”

There has not been official reaction from the leadership of the APC to Atiku’s exit from the party.