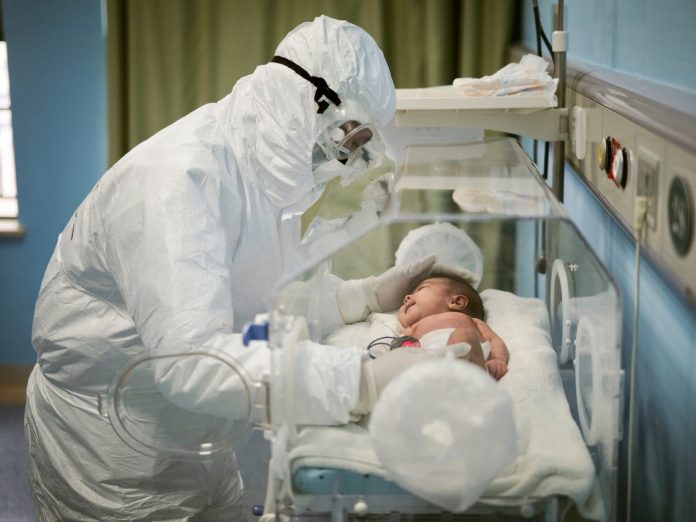 A baby whose mother received two experimental mRNA Moderna shots on July 19 and August 13, and was born on October 6, 2021 has died after bleeding from his mouth and nose.

The infant death is one of 52 reported deaths among 30,550 adverse events recorded by VAERS for children under 17 years old as of December 3.

Among the other reports: Another nursing newborn, who was pending discharge from hospital, suddenly developed problems after his mother received a second dose of Pfizer’s vaccine on September 9.

Within 24 hours, the baby experienced a significant drop in heart rate, low oxygen in the blood causing him to turn blue, and he developed difficulties sucking and swallowing. An ultrasound of his head revealed brain blood clots that “were not present prior to vaccination,” according to the VAERS report, which concludes that the baby was transferred to a higher level of care for neurological evaluation.

A report on a five-year-old girl in Iowa who had underlying health conditions but was doing well is among those recently added to VAERS. She was injected with Pfizer’s vaccine November 18 and was monitored in hospital. She was discharged from hospital a day later, but her father found her pulseless and not breathing. She had died unexpectedly during the night, three days after the shot.

An 11-year-old girl from the state of Georgia died the same day that she was vaccinated with Pfizer’s vaccine meant for children over the age of 12. No cause was stated in the VAERS report.

An eight-year-old boy from Wyoming who was “totally healthy and active” prior to receiving a first dose of Pfizer’s COVID pediatric shot was hospitalized in an Intensive Care Unit with myocarditis, an inflammatory life-threatening heart condition, two days later in November.

A previously healthy10-year-old girl in Oregon developed chest pain and had difficulty breathing and was hospitalized for myocarditis four days after getting Pfizer’s shot, even though she had already had COVID a year earlier.

In September, a 14-year-old from North Carolina received a first dose of Pfizer’s vaccine and the following day was drooling, could only mumble when speaking and was in an “altered state” at his school, when an ambulance was called and he was taken to hospital where he was diagnosed with a stroke and had surgery to remove clot from his brain.

A 13-year-old from Maryland suffered a fatal heart attack 15 days after receiving a Pfizer shot.

A nine-year-old girl in Southern California had a seizure lasting 30 seconds about a minute after receiving her first dose of COVID vaccine in November.

A 16-year-old Wisconsin girl with cancer whose death report was received by VAERS in November was found deceased in her bed the third morning after her shot in September with “excessive amounts of blood along with large blood clots that appear to have come vaginally.” No autopsy was ordered, according to the report.

One VAERS report describes a five-month-old breastfeeding baby who died from a rare autoimmune bleeding disorder, Thrombotic Thrombocytopenic Purpura (TTP) after developing a rash the day following his mother receiving a COVID vaccine.

TTP has been reported in a number of people who had been vaccinated with AstraZeneca and Johnson & Johnson’s vaccines. A Norwegian study put the rate at one case in 26,000 vaccine doses. If this rate were to be applied to 76 million American vaccinated children, 2,923 children could be expected to develop the potentially lethal bleeding disorder.

Most injuries in VAERS are neurological, according to Robert F. Kennedy, Jr., president of the Children’s Health Defense, who testified earlier this week to a Louisiana House Health and Welfare Committee considering a bill to add COVID vaccines to the mandated vaccine schedule for children in the state.

Kennedy said Pfizer hid at least one serious injury to a child in its vaccine trial, which included only 1,100 children. Maddie De Gary, a 12-year-old girl from Cincinnati, Ohio who took part in Pfizer’s trial and immediately developed a fever and seizures, is permanently disabled by the vaccine, but Pfizer pretends she does not exist. “She is in a wheelchair for life.

She can only eat through a feeding tube through her nose,” said Kennedy. “She was one of the 1,100 children. When we went back and looked at Pfizer’s study, they said Maddie De Gary had a stomachache. So, they lied.”