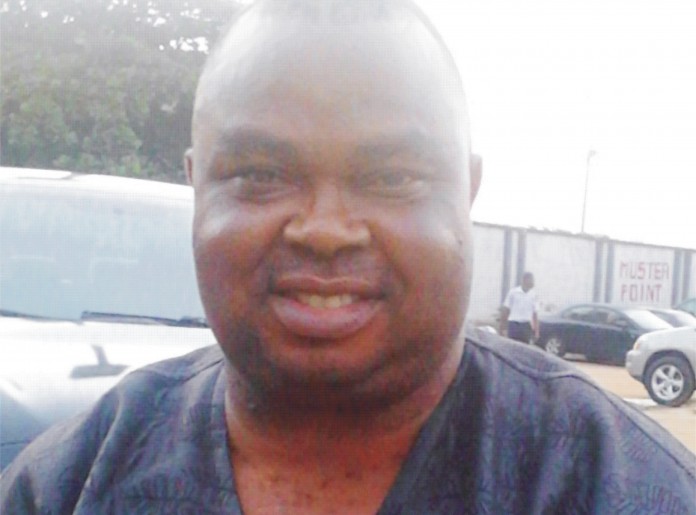 Chief Solomon Ogbonanna Aguene, Chairman, Board of Trustees, Aguene Art Foundation, Idocha Indigbo of Imo State,  in this interview with LANRE ADESANYA, condemns the agitation for independent state of Biafra, as well as the activities of the Niger Delta Avengers.

YOUR people are agitating for the independent state of Biafra, do you subscribe to this line of thought?
I am a Nigeria, I don’t know about Biafra, I have no other country than Nigeria. The beauty of this country is in our diversity and the unity of the country should not be negotiated. By now, our people should have put all of this behind and let’s move forward, we should leave the issue of Biafra and let’s work together as a country.
This is not just the right time to be agitating for self determination. When people talk about the Brexit and say we need to go too, even the Britain that pulled out of EU are already regretting that decision. They have taken the decision before knowing the import of their decision.

Nigerians from the East are not so comfortable with President Buhari and his appointments thus far, what’s your position?
Well, not everyone will be comfortable with a government that does not give room for looting of public fund, which our people are already used to under the last administration. Many people believe his fight against corruption is partisanship. Well, he is not going to be there forever. So, when another set of people come in, they will come and deal with the people he spared, then, we would have a balance.
People just need to be patient with this government. The phase we are passing through now is a phase many advanced countries of the world we look forward to have passed through.
That culture of becoming a billionaire overnight just because you have access to government money is gone, and people need to come to term with that reality. Most of the people complaining now were the ones who benefitted from the rot of the last administration. Everyone of them should quickly adjust to our new reality which is the Buhari phenomena, there is a new Sheriff in town who will not tolerate nonsense.
With President Muhammadu Buhari in the saddle, things can only get better. By the time he deals with these looters like common criminal, it will serve as deterrent to others. Imagine if a Buhari has not taken over the government and the impunity and recklessness of the last administration is allowed to continue, maybe by now, a man will be going with his wife and one of these politicians will just call the wife by his side to follow him while the helpless husband goes home empty.

What is your advice to your brothers in the Niger-Delta vandalizing oil pipelines, destroying the economy because of agitation?
Their problem is ignorance, it takes ignorance for you to allow yourself to be used by someone who has his own children enjoying outside the country. They buy guns for you to go about destroying your future, not that if you lose your life in the process your sponsor will do anything to compensate your family. These people will one day realise that they have no other country other than Nigeria.
This is criminal, to be destroying our commonwealth, they are destroying what belongs to the entire country, they are more or less like suicide bombers who have been brainwashed to destroy their own future, if you have any agitation whatsoever, you can make your grievances known without necessarily taken to arms or being destructive, they can organise themselves and make their point of agitation known in one voice, then, government will listen to them.

Your name prominently features in the field of Arts and Culture in this country, how did it all start?
When my father was alive as a young child then, he took me everywhere he went, particularly when the traditional rulers gathered together for any event, he was always taking me along, he was the head of what we called in our village opekwua, which stands for the traditional police.
There are some traditional rites that are performed when a noble person dies in the community, a traditional title holder, when a hero dies, a man with so many children dies, such events goes with traditional rites, seeing all of those traditional activities, watching traditional dancers perform and all of that, I became interested in this traditional and cultural things, this motivate me to go into Arts and culture.

What are the challenges facing your work as an expert in this field of Arts?
One of the things I have found out is that, majority of the people who are in charge of the Ministry of Arts and Culture at different level of government are not really interested in this thing, and so it affects the attention given to us and our Artwork, they have allowed our work to go unrewarded or acknowledged and this could be discouraging
I have personally taken over four hundred youths in Nigeria for Arts exhibitions, cultural events, exchange programs in America, Europe and other countries of the world.

You mentioned in your book the culture of respect for elders by Yoruba people which is lacking among the Igbo people; can you shed more light on this?
Yes I have observed over time that the Yoruba’s don’t joke with their culture, especially, the culture of respect for elders unlike our people, they are so particular about preserving their cultural heritage ,that I know that sooner or later the Yoruba Arts curator will overtake the Arts curator in the western world with commensurate values for Arts work, I know a lot of Yoruba people that are investing so much in Arts works just to ensure that their Culture and tradition do not go into extinction. I respect the Yoruba so much for this, that is why each time I have the opportunity to talk to my people, I ask them to take a clue from the Yoruba people, because this is affecting our growth and development, nobody can adequately take care of people without adequately understanding the culture of such people, it’s like when you are trying to guild your child through selecting a career, you must understand the innate potential of such a child.
There is no unity among my people today because they have completely ostracized themselves from their culture, have you ever seen a Yoruba man holding a title of Baale or oba in another man’s land, have you heard about an Emir outside the northern emirate, but you see Eze-indigbo everywhere, no respect for culture anymore, all these Igbo groups or unions divides us other than uniting us, it’s our culture that can unites us.