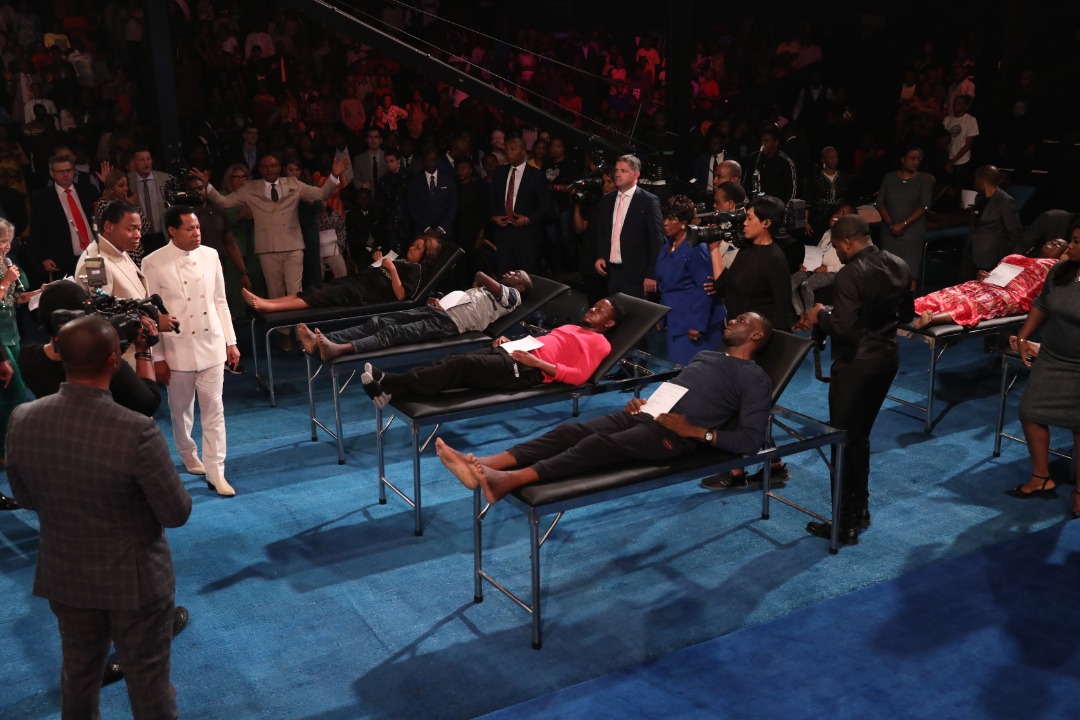 The opening day of the March 2022 Healing Streams Live Healing Services was filled with overflow of divine fulfilment of the expectations of millions of participants across the world. The March 2022 edition of the Healing Streams Live Services was heralded by months of joyous anticipation, ceaseless prayer and wide publicity, preparing people for participation at the innumerable physical and virtual centres in every nation and every corner of cyberspace. As the session began on Friday, people gathered like clouds foreshadowing a mighty downpour of divine mandate.

The floodgates of divine access to the throne were opened at 6.00pm (GMT+1) with a string of beautiful songs of faith and worship led by the peerless Loveworld Singers which created the atmosphere of anointing for the Healing Streams Live Healing Services. As the global congregation joined in singing along, and participants could tell that there was something special in the air; the anointing was palpable.

Sustaining the flow of the anointing, the Director of the Healing School, Pastor Deola Phillips, giving a short but powerful opening remark, took her words from the last song by the Loveworld Singers. She declared: “Healing streams from heaven are flowing! Already we are in the flow of the Spirit, and wherever you are around the world, I want to welcome you to this healing crusade, the largest and the most impactful, touching all the earth. You are welcome to the Healing Streams Live Healing Services with Pastor Chris!”

Reverend Tom subsequently highlighted that the preparation for the programme was phenomenal across the world over the months. He added that no one was left out in any part of the world, saying there were high expectations. According to him: “There’s been so much anticipation and preparation all over the world. This is like nothing that’s ever come before; it’s going to be phenomenal. There is nowhere in the world where people are not planning for this. Everybody is now aware that this is the biggest healing crusade the world has ever seen” 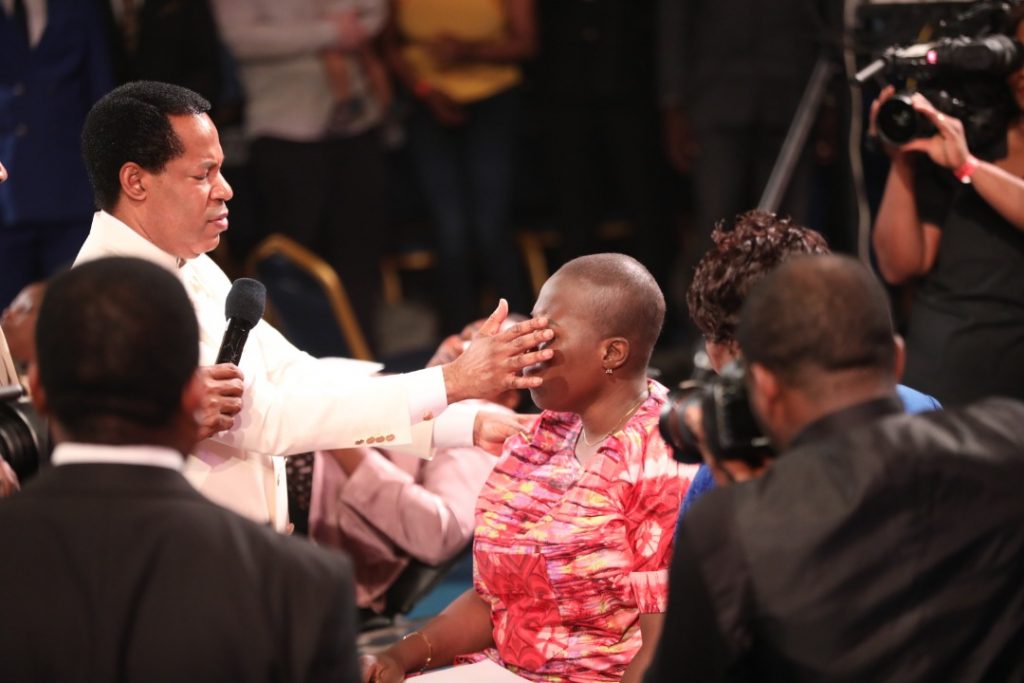 Pastor Chris healing a woman down with kidney disease

Evangelist Eddy Owase, a senior minister of the Healing School and host of Real Miracles Today, coordinated the segment of a plethora of testimonies, which elevated the faith of participants and stimulated more expectations from the programme.

Protogene Ahorushakiy, 25 years, from Rwanda, testified that in 2017, he had fractured spine in an accident and encountered paralysis from the waist down. He was confined to a wheelchair for four years and was going from hospital to hospital looking for a solution. Protogene narrated that while participating in the October 2021 Healing Streams Live Healing Services from a healing centre in his town, and after Pastor Chris prayed for the sick all over the world, he stood up for the first time in four years. According to him: “The doctors ran all sorts of tests, but all they could tell was that, beyond all hope of recovery, I had somehow recovered overnight.”

Mario Sandoval from Australia, in late February 2021, had after steaming a fish for his dinner, suddenly suffered an inexplicable domestic accident. According to him, the steaming pot fell and spilled 10 litres of boiling water onto his left leg. The burns were severe and extensive, he was left walking on crutches, and the doctors told him he would need a skin graft. Mario Sandoval declared: “I was desperate for a miracle”. He said at his pastor’s encouragement, he participated in the March 2021 Healing Streams, and after Pastor Chris prayed for the sick all over the world, he cut away the bandages on his leg to find it covered in brand-new, baby-soft skin. 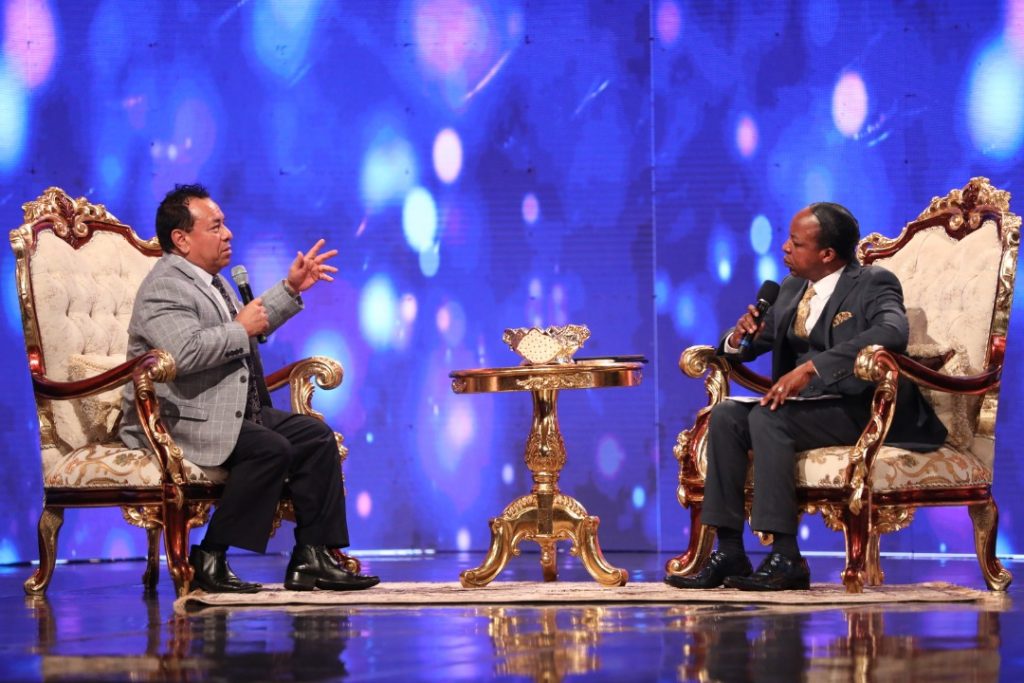 The testimonies that flowed stirred faith in the hearts of many. In the stormy atmosphere, Pastor Chris arrived and proceeded over to the healing line and began to minister healing to the world. It was curious that at a word, and sometimes just a gesture, demons fled and there was immediate healing. Cancers dematerialized, autoimmune conditions vanished without a trace, and people who had erstwhile been unable to stand up got out of wheelchairs and began to run.

Pastor Chris first ministered to the sick in the auditorium; thereafter, the Man of God began to teach from the Scriptures about the power in the Name of Jesus, and why we should pray and live in His Name. he cited Ephesians 1:20 to convey the basis of Jesus’ authority. “God set Jesus at His own right hand, When you set someone at your right hand, you give them the power to act in your stead. Jesus is at God’s Right Hand, far above principality and power and might and dominion and every name that is named. No wonder the Apostles used the Name of Jesus. This is what Christians need to rediscover,” he said.

People all over the world received the instant impact of this revelation. Many all over the globe received healing as Pastor Chris called up their cases in prayers and prophecies.

In the flow of healing, Juliana, participating from her living room in Kenya, got up from her couch, praising God; she had just been healed of kidney failure. Yanick from Curacao got healed of stage 4 cancer of the breast and liver.

Wurilaga from China was suffering from congenital heart disease but when Pastor Chris said, “You are healed!” her face lit up and she jumped up from her chair, rejoicing at the good news.

There was a harvest of miracles. Tumours vanished, heart failure was reversed, autoimmune disorders disappeared, and all manner of oppression ceased as the demons that had held people bound fled at the mention of the Name of Jesus. The testimonies started coming in almost immediately, with people calling in from places far and wide to confirm that they had been healed in their homes and in healing centers.

The was divine proclamation towards the end of the session. Pastor Chris declared, “All night and all day, these healings will continue until we meet again tomorrow, because this power that was transmitted to you wherever you are participating from will not leave. It stays with you.”

The beginning was fulfilling, revealing there is more in store for participants in the next two more sessions holding on Saturday and Sunday. This is an ample opportunity for everyone in your world to experience God’s power firsthand. The registration guide is provided for people to log into www.healingstreams.tv/3days, while you can create a virtual center to share this with your online community by going to www.healingstreams.tv/virtual