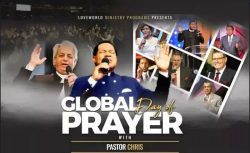 Today, Pastor Chris Oyakhilome is set to record another first with an anticipated historic attendance as he hosts billions of believers and non believers from all over the world for the much anticipated Global Day of Prayer.

The record-breaking event will take place on all LoveWorld networks and over 3000 Satellite, Terrestrial TV stations and Radio Stations, as well several Internet and Social Media platforms with translations in over 3000 languages of the world, today Friday, March 26th at 6 PM GMT+1 and continues through to Saturday, March 27th 10pm GMT+1.

This edition which is its fifth in series also marks the one year anniversary of the Global Day of Prayer.

Outstanding testimonies have emanated from past editions of this momentous program. Characterized by quintessential worship and praises to God, segments of exhortations and earnest prayers led by senior ministers in the LoveWorld nation as well as notable partnering ministries, the event has remained one to relish, reaching billions across all continents.

With LoveWorld President, Pastor Chris Oyakhilome, leading the prayer procession, the global impact has been phenomenal. It has steered economic recoveries in several nations, frustrated the acts of evil doers, emboldened leaders to stand for what is right, instantiated divine healings and the salvation of numerous souls across the globe.

The beckoning edition, heralds a thorough paradigm shift as God’s people, united on a solid front, are set to bring a halt to the wiles of the devil in governments, institutions, families, and all facets of human existence. It would be a loaded time as world renown healing evangelist, Pastor Benny Hinn, will also join Pastor Chris to minister and lead in prayers from the United States of America.

It is Pastor Chris Oyakhilome’s first Global Day of Prayer in the Year of Preparation.

Last year, he hosted four of its kinds that all proved to be incredibly popular and gathered lots of online viewers from all over the globe.

The upcoming Global Day of Prayer takes place exactly a year after Pastor Chris Oyakhilome kicked off his first one on March 27th, 2020. The session was streamed by three billion people and also featured Pastor Benny Hinn.

The two ministers prayed against the coronavirus, which they continued to do throughout the year.

On June 26, 2020, Pastor Chris Oyakhilome held another Global Day of Prayer, where his congregation utilized what they had learned during the months of praying in the spring.

“Today will be even more significant. We will begin, pray now into tomorrow, Saturday. We call it a day of prayer. The first one was to initiate what we wanted to do, and now it is a whole day – 24 hours,” Pastor Chris Oyakhilome said at the opening of the prayer day.

“The reason why He invited us to pray is because He intended to answer. Jesus taught us how to pray. From the scriptures, we learn about prayer. Prayer by the prophets, prayer by the apostles of Jesus. Prayer is not a sign of weakness. Prayer is our faith talking to God,” he said.

“It is god’s response that truly matters”

Another Global Day of Prayer followed on September 25th and once again attracted billions of viewers online.

Pastor Deola Phillips kicked off the 24-hour session by welcoming the many global viewers and by leading the first prayers.

Pastor Chris Chris Oyakhilome then urged the participants to make the most of the special time of prayer.

“The greatest part of prayer is not the prayer itself. It is the answer. We have not had a great prayer program except we have had a great answer. It is God’s response that truly matters,” he said.

Prayers were made for the church, the governments all over the globe, economic sectors, the spread of the Gospel, the salvation of souls and for young people and children.

The special day also contained several musical elements. It all climaxed with a powerful message from Pastor Chris Oyakhilome on September 26, 2020.

“Outside prayer, you will be weak”

Several of the LoveWorld pastors ministered, and viewers witnessed testimonies from around the world.

At the beginning of the Global Day of Prayer, Pastor Chris Oyakhilome stressed the importance of praying.

“In the presence of God in prayer, your faith rises. It rises to the surface. It rises to the top. What you thought was impossible… When you are in the place of prayer, it suddenly becomes possible to you. Your boldness stands strong,” he said.

“Outside prayer, you will be weak. You will feel weak. You will think weak, but in the presence of the spirit of God in prayer, you are strengthened. Those things that seemed impossible will look cheap to you and be possible,” Pastor Chris Oyakhilome continued.

Between the pastor’s many Global Days of Prayer, he has hosted multiple prayer weeks called “Your LoveWorld with Pastor Chris.” So far, around 100 episodes have been produced.

Join this train. Be a part of this historic global convergence of saints to rain God’s will in all establishments and nations of the world. Register now at www.pastorchrisonline.org to participate live as you also invite those in your sphere of contact do the same.