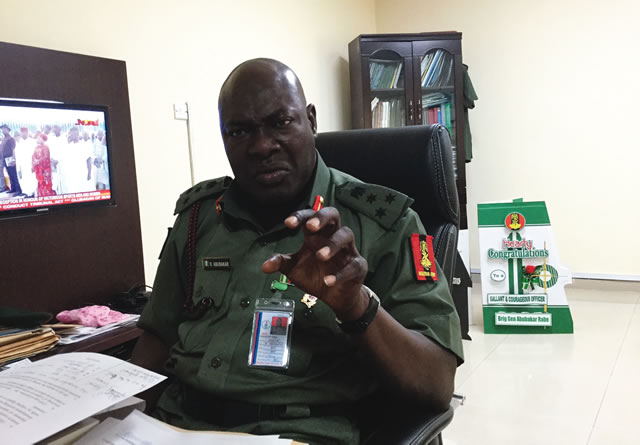 To continue in their dastard campaign and harvest more deaths and membership, Boko Haram insurgents have resorted to giving of soft loans to youths as bait for membership.

According to the Director, Defence Information (DDI) Brig Gen Rabe Abubakar said in a statement in Abuja that “It has come to the knowledge of Defence Headquarters that Boko Haram terrorists have now devised another means of recruiting unsuspecting youths into their fold.

“In this clandestine dispensation, Boko Haram terrorists have resorted to providing loans to young entrepreneurs and artisans in the North East as a way of inducing them for recruitment.

When contacted on the exact amount of loan given to the youths as bait, Gen Abubakar said he would get back later.

ALSO SEE: Cameroon to deport over 80,000 Nigerians who fled from Boko haram

He explained that “The major targets of the unholy business engagement are youths in the North East, especially the butchers, traders, tailors, beauticians and other vocational entrepreneurs who could be easily enticed with such loan without paying attention to sundry inherent dangers associated with the acceptance of such goodies from this satanic group or unfamiliar source.

“After such loans, the beneficiaries are given the option of either joining the group or risk being killed if they fail to pay the loan as at when due, whereas the payment has been surreptitiously programmed to fail by the benefactor, the Boko Haram.

“It is pertinent to state that having been effectively decimated and degraded, the remnant or surviving splinter groups of Boko Haram are desperate to recruit more people into their ranks and files as a result of sustained onslaught against them by the troops,” Gen Abubakar added.

As a result of this discovery, the Defence Headquarters has warned members of the public, especially those in the North East, to be weary and conscious of various tactics of the desperate Boko Haram.

He enjoined them to avoid loan or financial assistance from non-conventional source but from conventional financial institutions such as banks, organised trade unions or institutionalized savings and loans establishments.