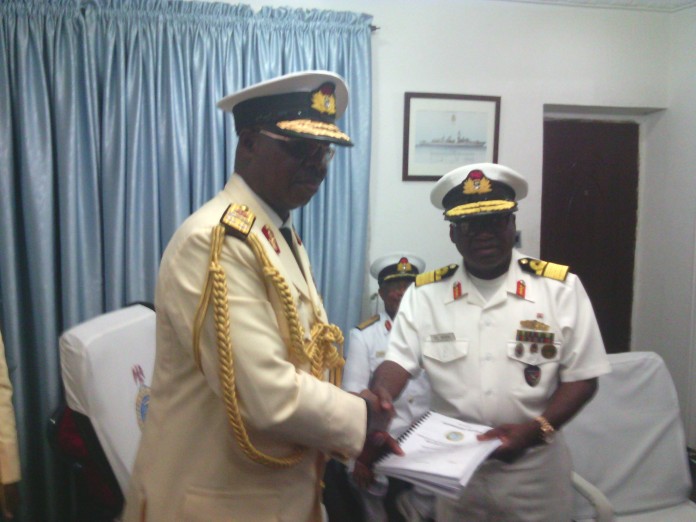 Speaking, while handing over to his successor, Rear Admiral Ferguson Dukas Bobai, after a colourful parade mounted by a detachment of naval personnel at the NNS Beecroft parade ground, Apapa, said his achievement within the seven months in office was borne out of Chief of Naval Staff, Vice Admiral Ibok-Ette Ibas strategic guidance.

He said, “In September 16, 2015, I was given this opportunity to serve as the FOC Western Naval Command and I decided it would be a shame to waste it on anything less than my best.

“Within the past seven months, the command worked hard to meet the requirements of the CNS Strategic Directive 2015-1 by discharging NN roles in its Area of Responsibility in line with global best practices.

“To this extent, the command carefully analysed the prevailing contemporary security situation in the country and came up with robust policing duties and sustained internal security operations.

“In demonstration of its robust policing duties, the command arrested a number of vessels for various infractions on our waters.

“These operations were greatly enhanced by the provisions of Regional Maritime Awareness Centre (RMAC) and FALCON EYE, two facilities that have reinforced NN’s presence at sea.

“Our cohesiveness made it possible to achieve so much. We have not heard cases of indiscipline and we did not court martial anybody.

“About, Operation AWATSE there has been a lot of arrest and the spate of pipeline vandalism has reduced in Arepo and Ikorodu areas. Even at the Atlas Cove, we are doing a lot.

“The challenge is that we do not have enough platforms.  Operations are about funding, from the little we have, we have tried to judiciously apply them to achieve what we have so far.

“You are aware of MT MAXIMUS that was hijacked on February 16 and have been taken up to 390 nautical miles away from Nigeria after Sao Tome.

“We were able to go there and free the vessel from the hijackers.  In fact, the suspects were handed over to the police on Monday for onward prosecution.

“There are so many achievements. If you go round the base, you will see some wooden Cotonou boats arrested with hundreds of drums of refined petroleum products.

“There is no month we do not make arrests. We try as much as possible to maintain presence at sea even with the little we have in terms of platforms.

“So, that’s why I said cohesion, formidable command will work together as a body. As I said earlier, a broom stick can be cut easily but a bunch of broom cannot be broken easily.”

Earlier, his successor, Rear Admiral Ferguson Bobai said in his new capacity as the 36th FOC of the command, that the navy would continually strive  to achieve its core directives.

He said, “The navy has a vision mapped out by the CNS, which is having a credible naval force that will ensure security of the maritime domain.

“Therefore, a motivated and well trained naval personnel will achieve the vision of the CNS. We should know where we are and where we are going,” Admiral Bobai added.