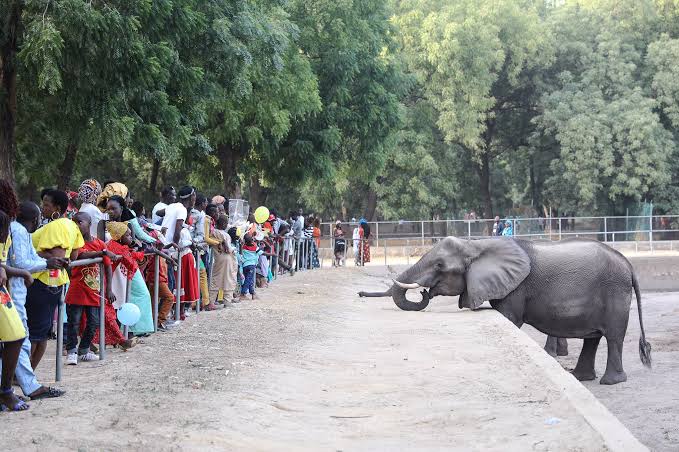 The Borno State Government says it has initiated process to restock the Sanda Kyarimi Zoo in Maiduguri, to encourage zoological development and attract visitors.

Mr Solomon Jidiayi, Head of Wildlife, Borno State Ministry of Environment, stated this while reaponding to questions during a News Agency of Nigeria (NAN) survey on disappearing zoo culture.

He added that the gesture was aimed at giving a facelift to the zoo which had not been upgraded in decades.

Jidiayi said the zoo, established in the seventies lost most of its animals and birds to outbreak of Rinderpest and bird flu diseases in 1994.

According to him, the zoo has in stock 37 species of animals including lions and elephants.

Jidiayi said the zoo had taken delivery of some animals including Zebra, Eland, and Warthog, adding that more animals would be received soon.

The official said the measure would not only revive the zoo culture in the state but reinvigorate the zoo as a conservation area to attract tourists and researchers.

“The state government is making effort to bring up some of the lost species of animals.

“The governor has approved funds for the restocking exercise,” he said.

According to Jidiayi, the management of the zoo is also has an animal exchange agreement with Audu Bako Zoo in Kano, which is permissible under zoo keeping laws.

He said that a green area had been created in the zoo to enhance recreational activities and social gatherings.

“Gov. Zulum’s administration has increased the standard of the zoo by 80 per cent, the gate fee is N50 per head. Conservation is not supposed to be a revenue generation venture,” Jidiayi said.

Other stakeholders in the North – East have identified lack of maintenance, poor management and political commitment as some of the bane of the zoo culture.

Amobi said the Kano zoo was one of the best tourist attractions in the past years, lamenting that the trend had changed due to poor state of the zoo.

He alleged that most of the personnel managing the zoo and wildlife parks in the country were neither zoologists nor professionals.

The don added that the trend resulted in lack of interest in management of the facilities.

“You cannot expect somebody without knowledge of zoos or one who is not a professional to manage it effectively.

“Under such condition, the animals were not being properly cared for and this makes zoos unattractive to tourists.

“People have preference for the national parks and game reserves as against zoos, so as to see the animals in their natural habitat,” Amobi said.

According to him, some of the animal species are smarter in their natural environment and they are affected by anxiety and depression when removed from nature.

The don said that this brought about the need to know the location and types of animals to keep in a zoo.

“For instance; flamingoes live in large number, therefore you must work on their psychology before you bring them into the zoo else they will not survive,”

On his part, Mohammed Nasir-Yusuf, General Manager, Bauchi State Tourism Board, said that poor management and lack of political commitments resulted in the closure of zoos and parks across the country.

He also attributed the low patronage of zoos in the country to insecurity and harsh economic conditions.

“There is no zoo in Bauchi State but the Yankari and Bura-Ningi game reserves as well as Sumu wildlife park, serve as our tourism sites in the state,”

According to him, zoos are becoming unpopular in view of the high cost of maintenance, saying that one zebra costs between N3.5 million to N4 million.

Also, Dr. Murtala Alamai, Head of Department, Leisure and Tourism Management, Federal Polytechnic Bauchi, advocated for the establishment of private zoos and zoological gardens to enhance tourism in the country.

Alamai said that former President Olusegun Obasanjo, was the only prominent figure to have established a private mini zoological park at his library in Abeokuta in Ogun.

He said existing zoological parks were confronted with serious problems preventing their effective growth such as lack of qualified personnel, refresher training programme and encroachment by land developers.

“Zoos are on the verge of going extinct due to lack of value attached to their importance. It costs huge human and capital resources to establish and maintain one.

“To establish a zoo, you need to have an average of 100 staff including vets and other specialised workers.

“A monthly feeding expenditure of animals caged in the zoo and park cost about N1 million depending on the quantity and types of animal specie,” Alamai said.

Bala said that poor orientation, lack of private zoo practitioners and obsolete facilities were some of the bane of zoological parks in the country.

He said that lack of access roads to some of the zoos and parks like the Oduduwa Zoo in Oyo and Sumu Park in Bauchi was affecting smooth operations of the facilities.

Also, Dr. Amos Sunday, a private Veterinary Consultant based in Yola, described the deplorable condition of Yola Zoo as “unfit for humans and animals”.

“The area did not look like a zoo rather, an empty space with scanty recreational facilities.

“The only animals in the zoo are three monkeys, an old tortoise and an ostrich, which are under deplorable conditions,” Sunday said.

A zoo keeper, who didn’t want his name mentioned, said that the Yola zoo was established in the early eighties under the defunct Gongola State.

He said the facility had been managed by the state government with no serious attention paid to it over the years.

“People used to visit the zoo especially during Sallah and Christmas festivities and, we used the little collections for maintenance of the facility,” the official said.

According to him, absence of animals and deplorable conditions are the major factors for the low patronage of the zoo.

Nelson stressed the need for development organisations and philanthropists to make contributions towards zoo development by adopting animals and providing free food to sustain the animals.

Meanwhile, some residents of Damaturu in Yobe, have expressed concern over lack of a zoo and wildlife park in the area.

Mr Mohammed Babagana, a conservationist, expressed concern over lack of a zoo in the state since its creation 30 years ago.

Babagana, who is also the Deputy Provost, College of Agriculture, Gujiba, said that zoos were important for wildlife conservation and aesthetic value for people to appreciate nature.

“The only zoo that exists near us is the Sanda Kyarimi Zoo in Maiduguri.

“There were plans to establish a zoo in Damaturu some years back; infact land was allocated around the present Yobe State University for the project.

“However, the project did not see the light of the day due to lack of political will,” he said.

According to Babagana, it is imperative for the state government to establish a zoo considering its relevance to town planning and wildlife conservation.

“It is therefore, imperative to bring animals, especially endangered species from their wild natural settings to artificial environment for protection,” he said.