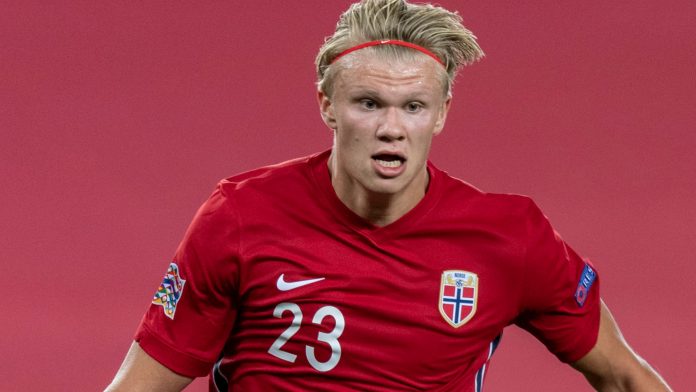 Norwegian’s goal machine Erling Haaland could be hoping to be the player to recreate his idol Cristiano Ronaldo’s international goal scoring record eventually.

The 22-year-old who got his hat-trick in his international World Cup qualifying game against Gibraltar on Tuesday wants to replicate his club’s goal scoring record in his national team as he feels that he should score more goals than he plays matches.

In a similar fashion, the Borrusia Dortmund star had taken his international tally to 12 goals in 15 caps with his trio of finishes on Tuesday, as Norway ran out 5-1 victors in Oslo.

Meanwhile, speaking after the game, the former RB Leipzig sensation has admitted that he does not feel like he is living up to his personal standards in terms of a goals-per-game yield.

The Leeds born striker speaking to TVZ after their win on Tuesday declared: “I do not score enough goals,”

“I’m close to one goal [per game] on average. I personally think that I should have had more goals than matches.”

Asked if he feels he will be able to exceed Jorgen Juve’s record tally of 33 goals for Norway, he added: “You can probably imagine what I am working towards.”

Norway sit joint top of UEFA qualifying Group G, alongside the Netherlands, and have a major chance to reach a first World Cup since France 1998.