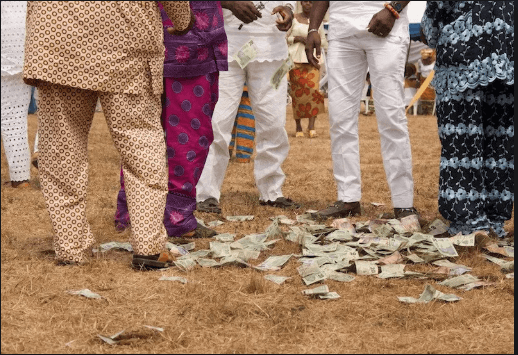 The officials of Nigerian Apex Bank, Central Bank of Nigeria (CBN) in a joint action with the Nigerian Police force (NPF) has arrested 5 persons alleged caught mishandling the Naira.

The suspects were accosted during a raid by members of Nigeria police force and officials of CBN in Ondo state.

The arrest in Ondo state is recorded as  first of its kind following CBN pronouncement of capital punishment on anyone illegally trading or simply ruffling the Naira note.

Joseph justified the arrest by quoting CBN’s Act Section 20 and 21, by definition, offenders risk a 6 months jail term or a 50k fine.

Police officers often seen on mission drive around town in search of criminals only this time Naira criminals.

Joseph speaking further, said the arrest was made not just in one location but different operating spot of black marketer. Adding that initial investigation has commenced.

He said large sum of money consisting of various denominations was recovered from the suspects.

CBN has made its position clear on what it mean by Naira hawkers as any such person or representative of a company who is either not licenced or authorised to trade currency particularly Naira in the open market. This, it accompanied by list of certified BDC operator on Friday.

The effort to clamp down these “criminals” may backfire on availability of forex. Within the regulated Forex market, there exist an informal subset who relate directly with general public which is now primary subject of CBN witch hunt.

The sacred BDC operators are numbered who might necessarily not serve the growing demand for exchange by the populace who require Naira notes to meet different purposes including spraying at a party.

These direct exchangers are found in street corners and strategic locations beckoning on their next customers with such persuasive heat.