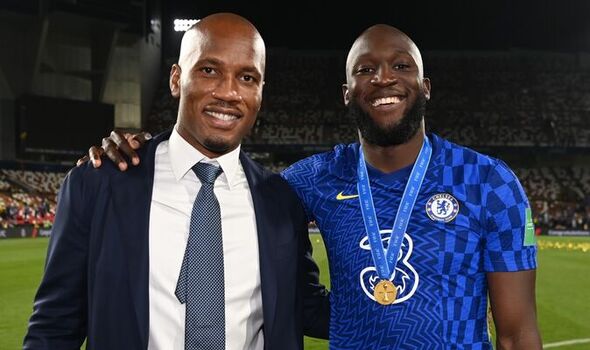 The Red Devils of Belgium on Thursday exited the World Cup without reaching the last 16 following their goalless draw against Croatia.

It was rather a hard pill to swallow for many considering the quality of players at their disposal. The undesirable outcome has since seen Roberto Martinez quits his role as boss after his team slumped to an early elimination.

Inter Milan striker Romelu Lukaku was introduced at the start of the second half to deliver the goals but the Chelsea forward whose career is in limbo after he was loaned back to Inter from Stamford Bridge in the summer following a nightmare year at the west London club, but the 29-year-old was definitely having a bad day in office after his series of missed chances.

Meanwhile, Chelsea legendary striker Didier Drogba was quick to launch a staunch defence for Lukaku after the Belgium international missed a string of chances that cost his side a place in the last 16 of the World Cup.

The former Inter Milan striker has made just two appearances since August for his club due to injury and showed understandable signs of rustiness in front of goal, missing a glut of chances that he would ordinarily have expected to bury.

Lukaku left the pitch in floods of tears at the end of 90 minutes and was consoled by assistant coach Thierry Henry, before breaking a glass panel in the dugout with his fist as he lashed out in frustration.

Drogba, one of Lukaku’s idols during his first spell at Stamford Bridge, felt sympathy for his former teammate and refused to single out the striker for criticism National Daily can confirm.

He told the BBC: ‘We all did (felt sorry for Lukaku) but we cannot put the blame on someone who has been injured the last two months, he comes on for 30 minutes and you want him to win the game.

‘As a striker he should have been a bit more on his toes but it’s very difficult to blame him for this.’

Lukaku’s first miss was, arguably, his worst when he struck the inside of the post from just seven yards with the goalkeeper way out of position, but again Drogba sympathised.

He said: ‘I think it’s difficult. The defender is in front of you and the goalkeeper, this is his right foot, the way his body is pointing towards goal it’s difficult to turn twist and score. It’s difficult.’

Lukaku will undoubtedly be painted as a scapegoat in some quarters but Drogba believes it would be unfair for him to shoulder the burden and pointed to the disharmony in the squad as the main reason for Belgium’s downfall.

He added: ‘You need a few more games to find the rhythm. I think a player like Inzaghi would score, he would always be on his toes.

‘I think he’s frustrated not only because he missed the goals but the spirit of this team during the tournament.

‘The talks, the fights between players this is what he’s frustrated about more than the goals he missed I think.’