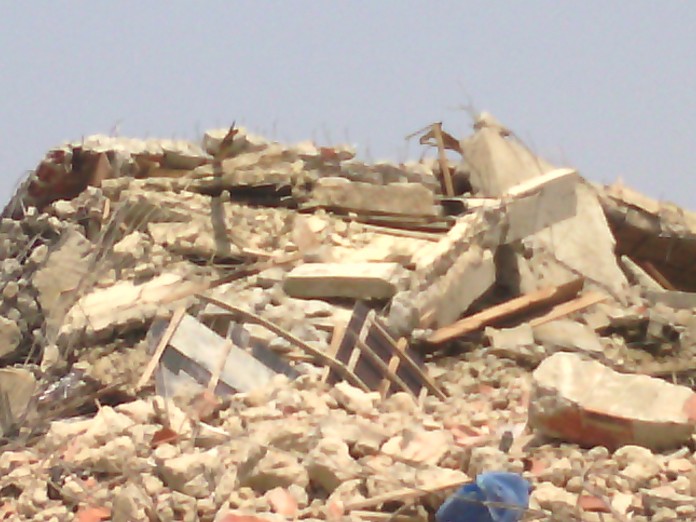 Sixteen more bodies were Wednesday recovered from the site of Tuesday’s collapsed five storey building under construction at Lekki bringing to an end the rescue operations.

The bodies include that of a security guard at the site identified as Abba Alli, was pulled out from the rumbles.

Given the names of some of his relatives that died, Awabi Hassan said he lost about 25 people. Some of the names were: Abba Alli – security, Mustapha, Yakubu, Yusuf, John, Ado, Ibrahim, Buhari, Johnson, Yohanna, Mariam – a female with four children – who were also identified as Yakubu, John, Illayasu and Yohanna.

As all the agencies were busy with evacuation, others including the Red Cross, LASEMA, NEMA and men of the Nigerian police were moving the corpses recovered to the Lagos State Ambulance Service.

Given a breakdown of the recovery, said the dead include one female, one infant aged between 6-8 months old while 13 were rescued alive and are responding to treatment at the General Hospital, Lagos.

On why the building collapsed, Akindele explained that “appropriate agency are handling that with a view to ascertaining the cause of the collapse.”

However, some family members of some deceased who are moslem said they are trying to secure the release of the corpses  to enable them bury them according to Islamic rites.

Reacting to what they were doing to release the corpses, the MD LASEMA said, “We need to respect Islamic rite. Necessary arrangement are on for proper documentations to release the bodies in line with Lagos state government and police regulations.

The Zonal Coordinator,  South West,  National Emergency Management Authority, (NEMA) Yakubu Suleiman had earlier said about 80% of rescue operations have been carried out saying that in about three to four hours, they would have completed the rescue operation.

However, an Engineer who spoke to National Daily anonymously blamed the management of Lekki Gardens for the collapse of the building.

She said that what they pay to their engineers who do slave labour for them is nothing to write home about. Explaining further, added that “How can you pay an Engineer N21 million for a building that should cost N30 million to build? She asked.

“They sell that same building for as much as N80 million. Lekki Gardens, Lagos state government, the Guilds of Engineers and those so-called Alausa supervisor in the building and regulation department must share the blame for the collapse.

“Everything is bad in Nigeria. Where does a normal human being who called himself a professional builder or an Engineer use 12mm iron for five storey building? The engineer queried.

A security man at the site who was almost killed except for providence as he went to open that gate for materials to be brought into the site also blamed Lekki Gardens for the collapse. “I will not tell you lies, what they are doing here to workers is bad. People do their jobs and they don’t pay them. They keep on changing Engineers. Some bricklayers pretend as Engineers supervising this huge building. Why will it not collapse when they are using sub-standard materials with cheap labour, he reiterates.