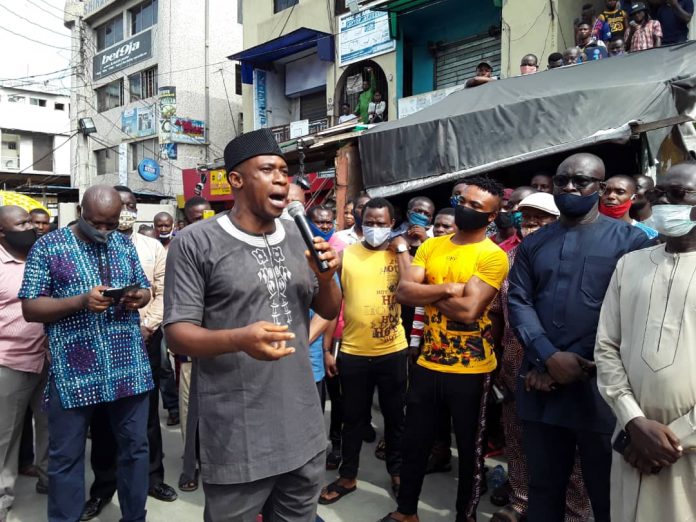 Share this on WhatsApp
Spread the love
The Iya Oloja of Computer Village market,Mrs Abimbola Azeez- Isokpehi has disclosed a gate within the market was removed to assert her authority over the market affairs.
Contrary to the claims in some news report which noted that the said gate constructed with a CDA contributions within the market was removed for no just course, Mrs Azeez-Isokpehi stressed that certain elements within the market space had conspired against her reign since inception and were merely out to disrupt the peaceful transactions going on there.
“They are bunch of liars, I couldn’t be bothered with their stories,prior to when we were crowned some people have gathered themselves together, especially the Igbo people that they will not submit themselves to the authority of Iya Oloja and Babaloja.
“Idowu lane in which the gate was erected as always being part of Computer Village,if you get to the entrance we have an arch there  which TECHNO made an advert with our sign board as Iya Oloja,which we erected throughout all the entrances of Computer Village.
“Suddenly some people just thought that they can cordon off Idowu lane, claiming that it is not part of Computer Village they want to be alone.
“This unscrupulous elements wanted to try my authority by removing Idowu lane as part of Computer Village, that was why they went to erect the gate there without my knowledge and I cannot be looking for people who hold the keys.If I know I am in charge.
“So if there is going to be a gate I will be the one to erect it they cannot lock me out of my market that I control, I went to report them at the police station and the gate was ordered to be removed, if they need a gate, they will tell me and we will construct the gate and our security agents will be in charge of the gate like we are in charge of all the entrances leading into the Computer Village.
“They are people that have vowed that they will not submit to authorities they would keep looking for one trouble or the other, but all that is inconsequential.” She said.
It will be recalled that the CDA in question led a protest on alleged constant harassment and assault of the people by men allegedly sent by Iyaloja and Babaloja. 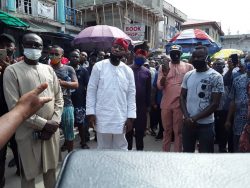 The lingering crisis in the ICT market became deepened when the gate erected at Idowu lane by the CDA on Saturday was allegedly removed on the order of Mrs Abimbola Azeez- Isokpehi, the Iyaloja of the computer village who also ordered the arrest of the CDA chairman and others.
Speaking with newsmen on Monday, the Vice Chairman of Ogunbiyi CDA, who is also the chairman, Coalition of Associations in Computer Village, Mr Timi Davies, explained that the people are tired of the constant harassment and high-handedness of the Iyaloja and Babaloja who were imposed on them by Mrs Folashade Tinubu-Ojo, the Iyaloja general.
“The CDA on saturday installed a gate at the entrance of Idowu lane to guide against insecurity, meanwhile, we approached the local government being our supervising body and they gave us the go ahead but in the evening after we have successfully errecting the gate, the iyaloja and babaloja brought the police to arrest the Chairman of Idowu lane, the CDA chairman and another trader.
Their offence for arresting them was that they didn’t take permission from the Iyaloja and Babaloja before erecting gate to shield their goods from thieves, for Christ’s  sake, Computer computer village does not belong to the market women association.
We know that the government does not create what it cannot control. The iyaloja created her team and this does not mean that she has the permission to govern Ogunbiyi community which is under a CDA which was created by the law of the state supervised by the local government.
These people using their thugs have continued to harass and assault people here to the extent that customers are already running away from the business environment for fear of being harassed, that is why we are calling on government to intervene before the market go up in flame”, Mr Timi said.
Ademola Olaifa, Public Relation Officer of Coalition Associations in Computer Village. There have been existing issues since the installation of Iyaloja. We took the matter to the Ministry and Lagos State House of Assembly and the Ministry of Justice.
Since their installation it has been various degree of victimization, extortion and bullying. They send their boys to beat up people almost every day and even harass our customers. These same people rob at will. We contributed money to install the entrance gate in Idowu lane, after the completion, the Iyaloja and Babaloja with their hoodlums came to destroy the work and took the gate away, he alleged.
Ade Adewuyi, Chairman Idowu Lane added that,” during the lockdown, we experienced alot of lootings and that was why we decided to errect a gate to protect our goods. It was at the completion of the work that they came to arrest us and took us to Area F police command”.
Meanwhile, when contacted, the Iyaloja said they were arrested by the police because they were carrying out those activities without the permission of the market board which is in charge of the market.
We are in charge of the market’s administration at this level, there was never a time this markwt was ran by CDA, it has always been ran by a joint committee before we were installed as Iyaloja and Babaloja of the Market
As the Iyaloja, we are responsible for the market, whatever that happens here we would be held responsible, so we need to be carried along, especially on activities in the market, this is my position”, she said.
Share this on WhatsApp 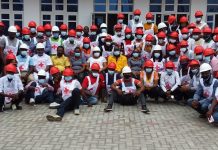