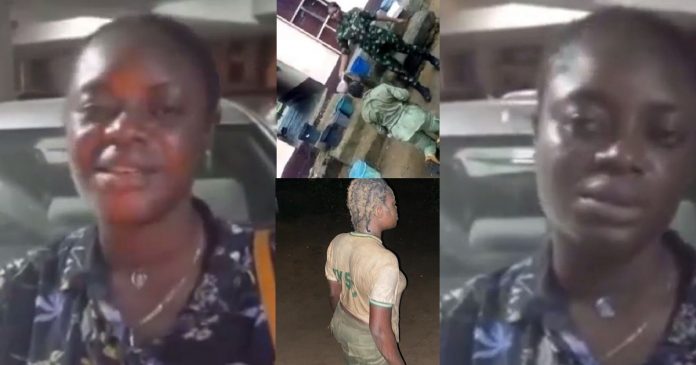 The female corps member who was allegedly maltreated by a female Army officer in Calabar, Cross River state, Ezeiruaku Ifeyinwa, has finally resurfaced after weeks of silence to explain her side of the story.

Ifeyinwa was recently in the public eye after a video of Chika Anele, a female soldier, bathing her with a bucket of what was said to be dirty water surfaced online happened at the 13 Brigade headquarters, Calabar, Cross River State.

Recalls that the Nigerian Army had said the female soldier, Lt. Chika Anele, seen in the viral video would be tried for unprofessional conduct.

In the footage, it was observed that the soldier ordered Ezeiruaku to kneel and while at it, soaked her with the dirty water.

She was also seen using the back of the bowl to hit her head.

Angered by the ill-treatment of the corps member, an activist, Agba Jalingo, who got the footage, posted it on social media.

The incident had generated backlashes on social media platforms, with many users decrying the harassment of Nigerian citizens.

In a now-viral interview, the corps member said she has been traumatised since the incident happened.

“Ever since the incident, I haven’t been myself, the trauma, each time I remember what the lady did to me, I feel embarrassed because she reduced me to nothing and the whole incident makes me feel bad,” she said.

The corps member also expressed her excitement at finally departing Calabar for Lagos amid the dust over the incident.

“I am thankful to God for coming out of Calabar. It’s not being easy for me. I have received calls from different people all over Nigeria saying they saw my pictures and the way I was maltreated but I thank God I am back and safe,” she added.

Ifeyinwa said she was not intimated by military authorities. She added that the army was against the female officer’s action.

The corps member also said she has nothing against the officer, adding that she only wants the law to take its course.