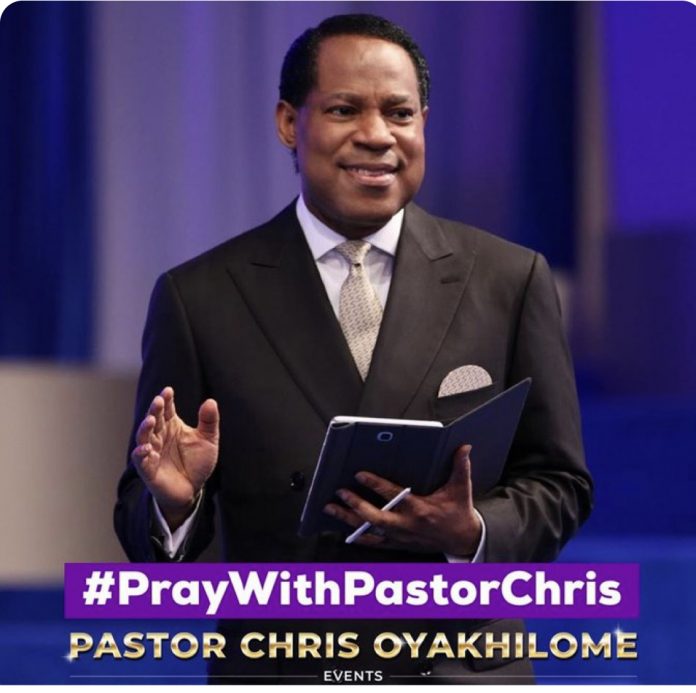 No matter how anybody wants to say it, the truth remains that the President of LoveWorld Inc., (aka Christ Embassy Church), Pastor Chris Oyakhilome has shown to be an outstanding role model as he undeniably distinguished himself from the bunch in his questioning of some of the issues around the Covid-19 pandemic and its attendant controversies, particularly the closure of churches based on unscientific lockdown and social distancing excuses among others.

With the confusion and uncertainty brought by the Covid-19 pandemic, many have turned to faith for protection against the storm. And as acknowledged by prominent preachers of the Christian faith across the world, Pastor Chris’ global leadership in prayers throughout the pandemic was clearly a strong source of strength and inspiration as he spread messages of hope and faith to billions of people around the world.

After hosting a Global Day of Prayer with Pastor Benny Hinn on March 27, 2020, Pastor Chris used his daily television prayer programme  to share with believers revelations of the scriptures concerning what was going on and to impress upon them the importance and power of prayer, especially when “times are trying and darkness encroaches from all directions.”

Rather than join in magnifying the fear pandemic or rather scamdemic as most prominent preachers did and some still doing, Pastor Chris encouraged his followers and other believers to pray fervently placing their faith and trust in God to properly equip world leaders in their battle against the spread of the disease and for the liberation of all those suffering from this crisis.

Believers in the Christian faith were encouraged to stand in unity and love against the devastating dark forces causing pain and panic around the world since the outbreak of the corona virus epidemic first in China before spreading to the other parts of the world.

‘Your LoveWorld with Pastor Chris’, a seven-day per phase series of live broadcast global prayer sessions that ran up to Phase 7 was remarkably the most prominent among the prayer programmes. LoveWorld television networks worldwide streams all of the prayer sessions, in addition to live streaming in all social media platforms thereby offering many avenues for people around the world to take part in the various sessions.

The prayer services broadcast daily since April, have drawn billions of viewers from the United Kingdom, the United States, African countries and other parts of the world including Canada, the Middle East, India and South America.

This special call to prayer came as the Covid-19 disease caused by the coronavirus continued to ravage or rather distress countries and populations worldwide.

Remarkably, despite fierce criticisms even from some fellow preachers of the Christian faith against the pastor for his statements on some of the controversies around the pandemic and some announced measures taken by national governments to address the spread of the disease, he insisted that most of the control measures were not based on science and that the disease on its own was not a death sentence as people were coerced to accept.

He maintained that the ever-changing recommendations from governments and public health agencies coupled with the shroud of secrecy that surrounded the emergence and spread of the corona virus disease had more to it than what the people were meant to believe.

True to what the pastor said at the onset of the corona crisis that most of the measures adopted were not actually science-based, several national and regional governments have come out publicly to discredit some of those measures and have started easing them off.
ALSO READ: Pastor Chris: When conspiracies meet their conspirators

The idea of social distancing and total lockdown of cities and in some places even entire nations are being daily regretted by several national government who have publicly declared that they were outrightly misled into some of those actions as they were actually not necessary in most cases.

Even The UK Media regulator, Ofcom, bowed to pressure from the army of antagonists against the Pastor Chris and issued a blanket warning to the LoveWorld UK Television Ministry (a cable channel belonging to Chris Embassy Church) to refrain from airing what the agency described as “unsubstantiated claims” by the Pastor especially his statements concerning the use of hydroxylchloroquine in the treatment of covid-19 and the relationship between the 5G technology and the deaths that came to be labelled as covid-19 disease deaths.

It is a well known fact that Pastor Chris’ pro-technology record is outstanding as LoveWorld and Christ Embassy indisputably have been at the forefront of using the latest technologies, including incorporating the anticipated 5G networks, to amplify God’s Word and to connect billions of Christians in fellowship around the world. So to say that the pastor was against the introduction of the 5G technology was a deliberate obfuscation of the context of what he actually said.

Today, there are LoveWorld television stations and networks available to viewers around the world. Pastor Chris’s online presence reaches hundreds of millions of people through digital multimedia shared on social networks including Twitter, Facebook, YouTube and KingsChat, the ministry’s own social media platform created for believers to connect to the growing LoveWorld community and share their faith.

When Pastor Chris declared the month of May as the ‘Month of Opening’, and the start of a new phase of God’s spirit at work opening doors, opening opportunities and opening nations, believers across the world knew that the issue of total lockdown was finished. And true to the prophetic proclamation, many countries around the world immediately began reviewing some of the stern measures and easing some of the restrictions on movement, gatherings and businesses that were put in place allegedly to stop the spread of the corona virus.

Now the pandemic is almost over, the conspiracy has been exposed, and the World Health Organisation has announced that what happened three months ago is a misunderstanding as reported in: https://www.gov.uk/guidance/high-consequence-infectious-disese-hcid. Now, it is being acknowledged that there was no need in the first instance for social separation and total lockdown. The global health agency is beginning to issue guidance to countries to open up and return life to normal.