The media has the noble responsibility of informing, educating the public and holding government accountable. This responsibility is expected to be discharged with the highest level of trust, accuracy, impartiality and balance, because of its power to influence and shape public opinion.

However, in the last couple of days, some news platforms (print, online and broadcast), as well as the social media, have become a seething cauldron raging with the emotion of people spewing multisyllabic vitriol over a statement made by the president of Loveworld Incorporated, aka, Christ Embassy, Pastor Chris Oyakhilome, on 5G technology, Coronavirus, and the Antichrist.

Several of them even clamoured for his arrest for allegedly ‘disinforming the public.’ Some who could not pretend about their hate and biases even went as far as peddling fake news that he (Pastor Chris) had been arrested by the DSS for questioning. And as usual the culprit platforms did not have the decency to retract their lies or even apologize.

The various media articles published in response to his statement were completely out of context. They reek of malice and a well-thought out intent to besmirch his reputation and totally assassinate his character and that of his followers. The biases are so strong, they practically leap at you, out of the pages of the newspapers, on the websites and the various Social Media platforms. It is quite sad to witness this recent descent from the sublime to the ridiculous of the media (not all), which has a constitutional responsibility of fair and balanced reporting; to journalism of bias, journalism propagating hate speech; and which has transformed itself to a self-righteous judge, clamping down on any voice of dissent! When media, even those who pride themselves reputable, begin to stoke the fire of hate, then it becomes clear that they have nothing to offer but the emptiness of hypocrisy.

In the context of global prayer

Firstly, when Pastor Chris made the statement, it was borne out of the intention of rallying Christians all over the world to pray for God’s Wisdom for world leaders especially in the face of the coronavirus pandemic that threw the whole world into panic. If background checks were properly done, it would be obvious to any journalist or self-titled ‘erudite’ opinion writer that Pastor Chris is not a political or social commentator. His recent comment was absolutely necessary so believers (especially his followers) can understand what is going on in their world and be guided to pray appropriately. But his critics who always latch onto media strings to spew their steam of invective are, of course, blinded by hate and any sense of rationalization. On March 27, he called for an initial 7-day prayer and fasting which he extended to 14 days for everyone and an additional 7 days for all Pastors and Ministers of the Gospel all over the world. Whilst teaching on one of those days, he taught extensively about the advancement of the antichrist’s agenda and the coming of the Lord Jesus.

Antichrist and the new world order

According to him, the antichrist is setting the world stage in such a way as to introduce a New World Order, which is the one-world government, one-world economy and one-world religion.’

By the way, aren’t these signs already being seen in the world today? One of the subtle submissions of the World Economic Forum meeting held in Davos in January 2020 was to have a one world economy. Similarly, it can be observed that the decisions being made by world leaders and government of nations in the face of this pandemic, are borne out of panic and are all heading towards that ‘oneness’ in their actions to combat the virus.

The attempt at having a one world religion is also covertly ongoing. Notably, according to the bible, the spirit of the antichrist is already in the world, (1 John chapter 4). The Lord Jesus said ‘when you see these signs, know that the end is near.’ It is for this reason that Pastor Chris, discerning the signs of the times, had to teach the church to understand the signs of the Master’s coming..

A natural, undiscerning mind may look at this as just another pandemic that would pass! After all the world had seen pandemics in the past; the bubonic plague of 1347 and the 1918 influenza pandemic. Fine! But COVID-19 isn’t just another pandemic. There are devils carrying out the agenda of the antichrist and these evil spirits working through certain world influencers want to use the opportunity of the pandemic to change the world forever. It is already in the news that the world will never return the same way it was pre-COVID-19 —a new normal will emerge!

Anyone who has biblical understanding and insight will know what the Holy Book said about our salvation (the coming of the Lord) being nearer now than when we first believed. We are in the 21st century not 20th century.

In summary, Pastor Chris’ message was that the antichrist wants to push his agenda faster than he should, and because this is still the day of the CHURCH, (not the antichrist’s time), believers have to pray and restrain him. Period! 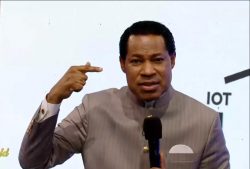 Pastor Chris is a technology-enthusiast who would eagerly embrace this technology even today, but there is a plethora of evidence that express concerns about the health implications of 5G and how this can exacerbate the spread of coronavirus in certain regions. It would have been expected that a responsible media holding the values of facts, accuracy and balance would investigate these claims. Is it true that more people are dying in places where the 5G networks are installed? Or Why not? Are people really being left to die because there are no hospital bed spaces to treat people with other ailments? Journalists can ask questions on the reasons for the fear about 5G. They can do their research and get balanced reports from scientists who are for and against the motion. But we see journalists sitting on the judgement seat, writing majorly reports by proponents of 5G.

Thirdly, let’s suppose that Pastor Chris is spreading fake news and disinformation as alleged. My question is: To whom? Has Pastor Chris called a global media conference addressing the world that COVID-19 or 5G is a theory? Was he not addressing members of his congregation in what he called the global prayer programme? Such people may even answer me and say, but some members of his congregation are citizens of Nigeria and they have the right to be properly informed. My next question then would be does a father not have a right to hold an opinion and call his children together to ‘brainwash’ them with his opinion? You may want to add, he didn’t call his followers to a room – the videos can be accessed online. The answer is the lockdown made this all the more possible. If not meetings of such nature could have been behind closed doors.

Looking at his right to hold an opinion, doesn’t the constitution of the Federal Republic of Nigeria guarantee that every person shall be entitled to freedom of thought, conscience and religion, including freedom to change his religion or belief, and freedom to manifest and propagate his religion or belief in worship, teaching, practice and observance. (Nigeria 1999 constitution as amended).

Furthermore, doesn’t it also guarantee that every person shall be entitled to freedom of expression, including freedom to hold opinions and to receive and impart ideas and information without interference?

Are we then going to say that because Pastor Chris’ perspective about this whole pandemic is at crossroads with what the World Health Organisation or the other global leaders or scientists believe, he should be stripped of the right to hold his opinion and tell his followers the same? Has any member of Christ Embassy, which the media is claiming is being misinformed, seen carrying placards that they will break any COVID-19 lockdown rules. Or have they been inciting violence based on the so-called disinformation? The 5G cables that were burnt down in Birmingham, UK, was it an activity carried out by his followers whom these ‘self-righteous’ media houses and their acclaimed ‘erudite’ opinion writers, refer to as being misinformed and misguided. Are we going to alienate from Pastor Chris his fundamental human rights to hold an opinion and to impart same to his followers? Why are these media organisations so swift to hate on dissenting voices? Where is the creativity of the media and its responsibility to listen to all sides, investigate and report facts?

Such people may say the media has a right to intrude or criticise an individual if what he says or does impinges on public interest.

Yes, they may be right, after all Pastor Chris’ followers and listeners make up almost half of the world’s population. Statistics from the Global Day of Prayer aired on March 27, 2020, on several Nigerian TV stations as well as radio and multi-platforms on Internet, Youtube, Facebook and over 900 TV/Radio Stations and Satellite TVs shows 3 billion people participated. The latest Special Easter Sunday Service with Pastor Chris which also featured renowned televangelist Pastor Benny Hinn  broadcast on Easter Sunday, April 12, attracted 3.25 billion viewers/participants. This is not far from the official figures of the flagship book which he authors, the Rhapsody of Realities. The book is said to be the most translated book, second only to the bible, and over three billion copies of this book, which is in its 20th year in print, has been distributed in 242 countries and territories in over 2000 languages and still counting.

The influence of such a man will definitely make him a subject of discussion. Criticism itself is not a bad idea. A man who has such a humongous followership or listening base definitely has no small influence. For 3 billion people out of 7 billion people on the face of the earth to tune in to listen to him is a testament to what he has to offer.

These are matters that should pique the media’s interest rather than getting involved in sensationalism, feeding their hatred and feeding the general public with the same.