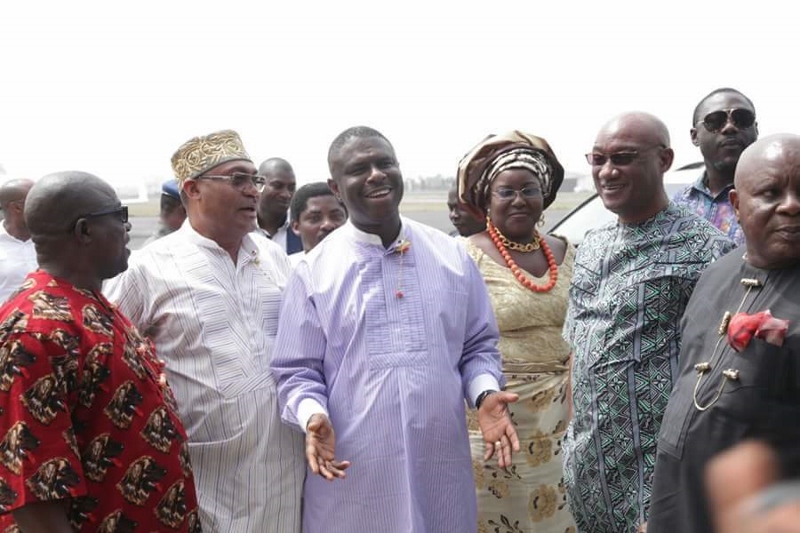 Share this on WhatsApp
Spread the love
• Greets Governor-in-waiting on his 45th birthday
Astute Politician and Administrator, Hon. Dakuku Adol Peterside, will in the first quarter of 2016 liberate the people of Rivers State from the shackles of evil and maladministration to which they have been subjected in the past seven months by the Nyesom Wike administration, the All Progressives Congress (APC), Rivers State, has said. The ray of hope was contained in a statement by Rivers APC congratulating Peterside on the occasion of his 45th birthday on Thursday, 31st December, 2015. Peterside is the Rivers APC candidate for the State Governorship Election which both the Election Tribunal and the Appeal Court have ordered to be repeated within 90 days after voiding the sham polls of April 11, 2015, that illegally brought Nyesom Wike and the Peoples Democratic Party (PDP) to power.
“We wish to heartily greet our Governor-in-waiting on the occasion of his 45th birthday, which is coming shortly after his repeated victories over Wike and the PDP in the courts of law. We have no doubt that he will repeat this feat during the forthcoming Rivers re-run gubernatorial election. This has become imperative in view of the sharp increase of insecurity, kidnapping, armed robbery and diverse criminal activities in our dear State since Chief Wike became governor by force on 29th May, 2015. We thank the good people of Rivers State in advance for their votes and wish to reassure them that Peterside shall, upon assumption of office as governor, wipe away the tears which Wike has inflicted on them,” Rivers APC said in a statement signed by the State Chairman, Dr. Davies Ibiamu Ikanya.
The statement issued in Port Harcourt noted that “victory for Peterside in the court-ordered re-run polls will go a long way to address the three principal injustices visited on some sections of Rivers State4 one of which is the Riverine areas of the State not occupying the seat of power since 1990.” Continuing, the party said: “The second injustice to be addressed is that of the Ogoni, a key tribe of the State, not producing a Governor, Deputy Governor or the Speaker of the State House of Assembly since the creation of the State as far back as 1970. The last injustice is that of the South-East Senatorial Zone not producing the Governor since the creation of the State, as Rivers East produced Dr. Peter Odili while Rivers West produced Rt. Hon. Chibuike Amaechi, thus leaving the South-East in the cooler all these years.”
According to Rivers APC, “Dakuku’s candidature is a divine script. It enables APC to achieve two of the three necessary goals of conceding power to the South-East Senatorial Zone and also shifting power from the Upland to the Riverine area of the State. Dr. Dakuku Adol Peterside, from the Riverine area of Opobo/Nkoro LGA, is a veteran federal lawmaker, a symbol of unity and a symbol of hope for Rivers State and her teeming population.”
The party warned that if Wike becomes governor, it will make the Upland to govern the State for 24 years, thus effectively excluding both the South-East and the Riverine from governance of the State. “This to us in APC is the highest injustice that can be meted to a fellow partner in the growth and progress of our dear State. This is the mission and goal of the struggle and battle for the soul of Rivers State,” the statement said.
It described Peterside as a personality widely accepted by all the sections of the State, a symbol of unity, visionary, egalitarian and most importantly a patriot whose love for Rivers State and her people is infectious. In addition, according to Rivers APC, “Peterside is a man who has earned a reputation as a charismatic and disciplined leader; creative and hardworking, a broad-minded fellow with strategic insight. He brings integrity, compassion, pro-poor perspective and intellectual dimension to bear in tackling tough national issues. His loyalty to friendship and bridge building skills are remarkable. Respected as one of the most result oriented, meticulous, consistent, trustworthy and God fearing political leaders. In all public offices he has held he has brought innovation to bear and made remarkable impact that has endeared him to his fellow compatriots. He is a role model and mentor to several young persons, who look up to him for inspiration.
“As we congratulate him for turning 45 we urge him not to relent until the total freedom of River State from the politics of WIKEdness is achieved,” the party declared.
Share this on WhatsApp
Related Topics:APCHon. dakuku
Up Next