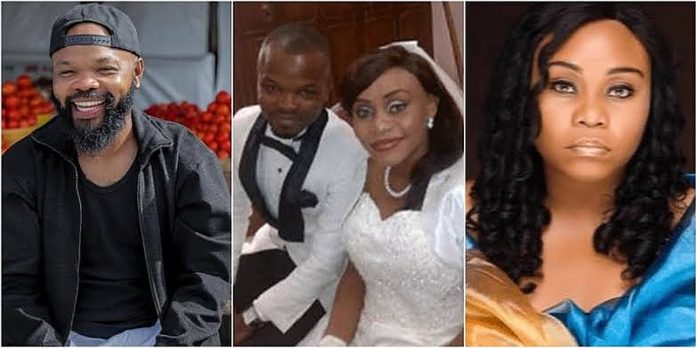 Uzoamaka Ohiri, ex-wife of popular comedian and talk show host, Chinedu Ani, a.k.a Nedu, has been cautioned against approaching court over the controversy surrounding the paternity of her first male son.

Comedian Cyril Ugege, also known as Osama, gave the advice in a letter through his lawyer, Pelumi Olajengbesi.

The letter, dated Sept. 9, was addressed to Uzoamaka through her lawyer, Nancy Onwa.

Osama advised Uzoamaka not to further expose herself by heading to court or granting more media interviews on the raging issue.

Osama had, through his Instagram channel; @osamacomedian on Sept. 4, supported Nedu’s claim that the funnyman’s first male child was not his.

He had further alleged that Nedu ran out of the house in 2017, noting that his friend suffered domestic violence in the hands of Uzoamaka and not the other way round.

“Madam @hazel_uzor did you tell them that the pregnancy that made both of you marry turned out not to be Nedu’s child?” Osama had posted, while also sharing a supposed DNA test previously shared by Nedu, indicating that the comedian’s chances of fathering the child were zero per cent.

However, Uzoamaka, in a Sept. 8 letter addressed to Osama through his lawyer, had accused Nedu’s friend of defamation of character and gave a seven-day ultimatum for him to withdraw the statement, threatening that she would head to court at the expiration of the notice.

But reacting through his lawyer, Osama, urged Uzoamaka to sue him before the expiration of the seven-day ultimatum.

“There are open channels to address your client’s honest concerns, where any, through a private correspondence which could have afforded both parties the opportunity to resolve issues raised especially given your client’s public admissions in interviews capable of reducing her worth in the estimation of reasonable persons.

“The same reputation made questionable by your client is now being enunciated in a publicised claim for libel.

“Having, however, embarked on this voyage, we will not be encouraging your client to build a statute of dishonour for herself in the name of a needless court case, unnecessary media publications and interviews.

“Take notice and let it be abundantly clear that, as we tarry for your too long seven days’ notice to come to term, our client may be left with no other option but to catalyse the same process of law against your client,” the letter read.