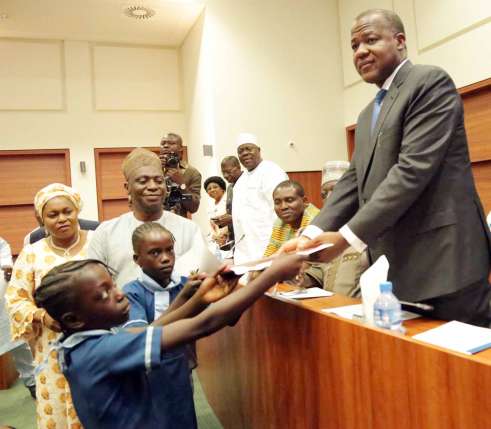 Share this on WhatsApp
Spread the love
Speaker of the House of Representatives, Rt Hon Yakubu Dogara, on Monday hosted students from four schools in all Internally Displaced Persons camps in the Federal Capital Territory to mark the 2017 Common Wealth Day.
Speaking at the event, the speaker charged the children to be ambassadors of peace by promoting and engaging in only activities that will bring peace in order to make the world a safer place and prevent a reoccurrence of events that led to their displacement.
He said, “My charge is that having been expelled by violence, as you grow up, dedicate yourself to the pursuit of peace so that that same thing that happened to you will not happen to your children. Be catalysts of peace wherever you go.”

Drawing an illustration with prophet Joseph from the Holy Books, the Speaker,  encouraged them to aspire to any height even without the presence of their parents beside them, saying God will always support them in their endeavours as He supported Joseph.

“Even though he had challenges, he had no parents by his side from prison to when he became the prime minister of Egypt”, he said, adding that, “no matter the challenges, you can overcome it.”

Dogara also emphasised the strategic role peace plays in the development of a democracy and by extension, the society, saying the consensus about peace is something that can’t be avoided if progress will be achieved.

While assuring the pupils that they will soon return to their communities where provisions have been made for proper schools with buildings, he pledged, in collaboration with his colleagues, support to the building of structures for the immediate educational needs of the IDPs.

“I will speak to some of my colleagues to see what we can do for IDP schools in Abuja, ” he assured them.

Schools Without Walls, a private venture, is run by Life Builders Initiative, a non-profit organization headed by Mr Sanwo Olatunji-David.

Share this on WhatsApp
Related Topics:Internally Displaced Persons (IDPs)RT Hon. Yakubu DogaraSpeaker of the House of Representatives
Up Next