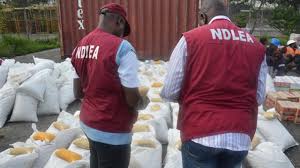 Assistant Commander and Head of Operations and Intelligence of the Command Mr. Peter Ogar  disclosed this to National Daily, today.

According to him, the suspects, including a distributor of codeine, were arrested for drug offences ranging from possession, peddling and consumption in various parts of the state within April 2018.

The suspects include 33 males and eight females.

Ogar also said that four farms where substance suspected to be cannabis sativa was being cultivated were also destroyed within the period.

He added that the command would leave no stone unturned in ridding the state of illicit drug activities.

He commended the Federal Government for banning codeine, adding that in Edo; the abuse of codeine and codeine-based drugs by students in secondary and tertiary institutions was rapidly increasing.

Ogar expressed optimism that with the backing of the Federal Government, the agency would ensure that patent medicine dealers and the Pharmaceutical companies in Nigeria enforce total compliance.

“So in effect, NDLEA can now enforce and charge any person in custody of codeine accordingly in line with the laws of the agency.’’

The Federal Government has directed the National Agency for Food and Drug Administration and Control, to ban with immediate effect importation of codeine as active pharmaceutical ingredient for cough preparations.

Experts say codeine syrup used in the treatment of cough, when abused, could lead to full-fledged addiction that is potentially deadly.