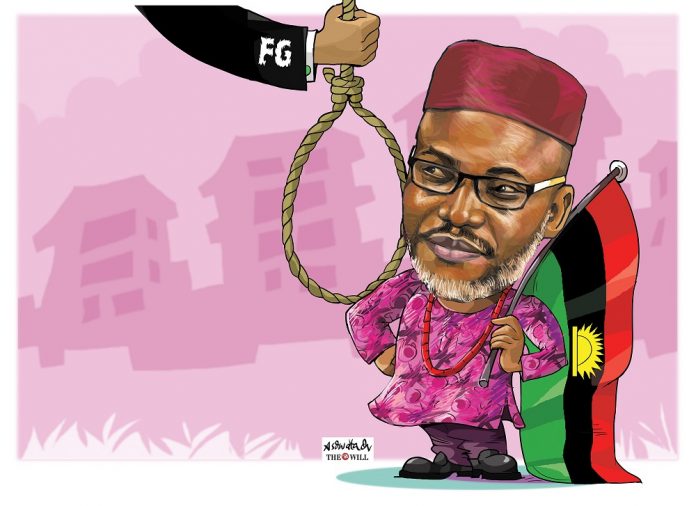 One of the counsels to the embattled leader of the Indigenous People of Biafra, Nnamdi Kanu, Aloy Ejimakor has revealed how the Department of State Services prevented the signing of a consular assistance form by the United Kingdom.

Recall that the British Government had expressed readiness to provide “consular assistance” for Kanu but needed him to assent to the assistance by signing some forms.

Ejimakor who made this known via a statement on Monday titled ‘Summary of my visitation with our Client, Mazi Nnamdi Kanu on Monday 19th July’, said the forms delivered to Kanu in DSS’s custody were returned to him unsigned.

An excerpt from the statement reads, “Last Saturday when I visited Mazi Kanu, I expressed strong concerns about the inordinate delay in having Kanu sign the two Forms I had taken to the DSS for Kanu’s signature some days before.

“Both Forms relate to affirming his consent to consular and diplomatic interventions by the United Kingdom and her High Commission in Nigeria.

“Surprisingly, the Forms were returned to me unsigned.

“Let me make it clear that the day I took the Forms to the DSS, the officers on location were amenable to Kanu signing them until somewhere along the line, they tarried and decided to send it to the legal unit for vetting.

“So, my sense is that it’s the legal unit of the DSS that disapproved of Kanu signing the Forms for reasons that were not given to me.

“As a lawyer, I don’t see any legal advantage the government of Nigeria stands to gain by blocking Kanu from signing those Forms. The Forms are but a mere routine in matters like this.

“Instead of any advantage, the refusal will help fuel the notion that the government of Nigeria is deliberately isolating Kanu from having consular and diplomatic access to the United Kingdom.

“It does not comport with the best traditions of fundamental fairness that a detainee is being denied access to resources that will assist him in his defence. This is one of the things that will count in our reckoning as this matter continues to fold.”