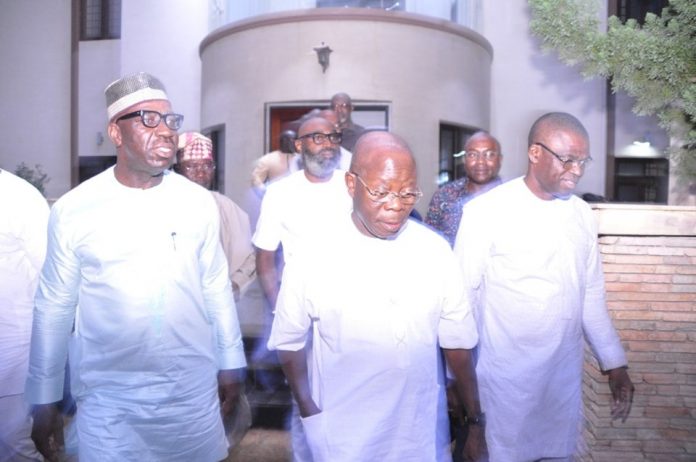 By Kasim Afegbua
I have resisted the urge to get drawn into the ugly narrative that is presently bedeviling the unique state of Edo, the heartbeat of Nigeria, simply because of the dangerous stigmatisation of persons who speak out on the issue. It has become a tale of “what side of the divide do you belong”?. Incidentally, I can instructively consider myself an insider in the political economy of Edo state, and most recently, some people now see me as a prophet who openly predicted this political love lost in 2016 when all men, including Governor Obaseki, were pretending to be nice, loyal, reliable and trusted political godsons to Comrade Adams Oshiomhole, then, Governor and now National Chairman of the All Progressives’ Party. I feel a sense of pain, each time, seeing the level of decay in trust building. I see mutual suspicion everywhere. I see betrayals everywhere. I see ingratitude walking the streets of Edo’s political trajectory. And I see how much people are running skewed commentaries borne out of ignorance or deliberate mischief. I feel pained that the bonds of friendship are being broken on a regular basis, by persons who have since become the major players in Edo APC politics and their fringe supporters and so-called loyalists. Casting my mind back to 2012 through 2016, I am like wondering if what obtains presently in Edo state deserves any place in political commendation.

This intervention will be a 5-part series, which will also form part of the chapters of my Edo odyssey, a period of four solid years, first as a Special Adviser, Media and Strategy and later as Honourable Commissioner, Information and Orientation. A time that I saw pretentiousness, knavery, dubiety, subterfuge, chicanery and occasionally, sincerity. A time when for want of currying the favour of the Comrade Governor, lies are told, hyopcrisy flourished, backbiting and petty gossips were easily marketed, to gain undue attention. Certain persons who came into government looking ragtag with sunken eyes, and dry bones, like the chizel of a wood carver, were patronised with life saving appointments. Today, they call the shots in the Edo political infamy in recent times. They now call some of us names, call Comrade Oshiomhole all manner of unprintable names simply because they think they have conquered the today and tomorrow of Edo politics. How wrong!  I am not going to hold brief for the National Chairman of APC, because I have my grouse with him, chief of which is his inability to complete my community roads, which are now deeply decayed, but as a stakeholder in Edo political economy, I owe it a duty to speak to certain facts that remain unassailable.

First, whatever has become the failures, successes and setbacks of the Oshiomhole administration, those who served in that government, in whatever measure, must, in the spirit of collective responsibility, share from it, including the present Edo Governor, Godwin Obaseki. Whatever be the halitosis that were recorded against that government, some of the present actors in the current administration, must also share from it. If the successes are outlined, I will share from it. If the failures are outlined, I will share from it, ditto for Governor Obaseki, who for eight solid years, was “in bed” with Comrade Adams Oshiomhole, come rain, come shine. It was in recognition of that “friendship”, that might have motivated Oshiomhole to consider Obaseki as his successor. Some people in government have accused me for rising up on each occasion to defend the outgone government of Adams Oshiomhole, even when I have politically adjusted to become a member of the opposition Peoples’ Democratic Party, (PDP). My line of thought remains the same. I was part of that government for four unbroken years, during which time I made my honest contributions to the best of my ability to discharge my responsibilities. I know for a fact that I cannot be accused of “eye-service syndrome”, or name dropper, or as someone who tells lies to curry undue favour.

Like every mortal, I have my own shortcomings and imperfections, but I am not easily sold to the knavery and dubiety of persons. I spoke my mind at each point no matter how unpopular. I am driven by my convictions and motivated by my sense of openness when issues come to the front burner of political choices. I saw the full glare of Oshiomhole’s politics of ensuring that Godwin Obaseki succeeded him. I openly canvassed support for Engr. Chris Ogienwonyi, who, in my considered estimation, would have been a more rounded Governor for the state, at a time we needed someone to leverage on the gains of the Oshiomhole years. Comrade Oshiomhole’s argument was equally compelling but I was not sold to it. He had told me he wanted one of us who had been part and parcel of the government, and someone who had been a member of policy formation and execution, someone who could leverage on his achievements and failures, and make further positive impacts. The Benin City Storm Water Masterplan, the Edo Specialist Hospital, the Edo University, Iyamho, the Red Roof Revolution for Primary and Secondary schools, and the road infrastructure across the state were some of his legacy projects, which he wanted continued by his successor. And that if an “outsider” succeeded him, he might not be familiar with the thought processes that were invested in conceptualising those projects.

In his judgment, Godwin Obaseki, who was his Economic Adviser would easily understand the templates of those legacy projects, so he was prepared to break the roof to ensure that Obaseki succeeded him. The rest, as often said is now history. Comrade Oshiomhole quarelled and quarelled with me over my taciturn approach in my support for Godwin Obaseki. He queried and wondered how I could tell him boldfacedly that I was working for Chris Ogienwonyi, former Group Executive Director of NNPC. My choice for Chris Ogienwonyi prior to the primary election was informed by several variables. First, he cuts across a wide spectrum of the Edo electorates, young and old, schooled and unschooled, and amongst the Edo intellingentsia. There were so many attractive attributes that endeared him to my heart. He wouldn’t condescend to the level of hiring thugs and political urchins to unleash havoc on Edo people, as we presently see. He is cerebral, highly opinionated, down-to-earth and a benefactor to many prominent Edo sons and daughters who easily recounted details of his philanthropy and good-naturedliness throughtout his 34 years of unblemished public service in the nation’s oil industry, the NNPC. His elocution and oratory were loaded with class and punctuated with a rich understanding of  governance and service delivery. Such a man, whose children are fully grown and doing well in topnotch companies would not contemplate conquistadorial acquisition of wealth. On account of his age, exposure, philosophy of life and subliminal humility, his entrance into the world of politics would be defined by love for the state and selfless service, and not any pecuniary consideration. But Oshiomhole felt otherwise. He was persuaded by his multi-billionnaire friend, Aliko Dangote to take Godwin Obaseki, and the rest is history.

Seeing the politics of altercation and attack that has presently enveloped the entire political landscape of Edo state, I will be surprised if Comrade Oshiomhole still holds those beliefs and arguments that factorised his choice of Obaseki in 2016. I am not seeing any continuation of the legacy projects started by Comrade Oshiomhole. Benin City flooding has become a sore thumb for a people that daily contend with government’s neglect. The Edo University , Iyamho is suffering from arrested development. The physical buildings remain the way they were since Comrade Oshiomhole exited, aside from one or two addition by the University’s own communal effort. Edo Specialist Hospital has remained a ding-dong affair over its operational modus operandi. Only last week, some members of the Edo Civil Society were reportedly beaten up for daring to protest over the suspected privatisation of this legacy project. The Red Roof Revolution in the Primary and Secondary schools have been replaced by EdoBest programme, a good project that is yet to leave the shore of Benin City to other parts of the state. So, whatever be the motivation for ensuring an Obaseki’s succession, must have been defeated within three years.

Aside from the above, Edo state has become heavily militarised and radicalised on account of the cold war between Governor Godwin Obaseki and his benefactor, boss and friend, Comrade Adams Oshiomhole, the National Chairman of the APC. If Comrade Oshiomhole is expecting sympathy from a motley assemblage of Edo political players, he may be mistaken. A lot of Edo political elite quarel with the fact that Comrade Oshiomhole ignored their admonitions not to go for an Obaseki, and that whatever he gets from him at present, should be his lot to cope with. Following the realities in Edo state at present, playing opposition to the Governor is being visited with visible hostilities from a category of youths population who enjoys government’s patronage.

In the last two years, Edo has remained in the news for the wrong reasons. My friend and brother, Blessing Agbomhere was assaulted on 17th May, 2017, at the Benin Airport. He was bruised with injuries. He pointed accusing fingers at the Deputy Governor. Sometime ago in July, 2018, Senator Matthew Urhoghide, the Senator representing Edo South was attacked at the Benin Airport by pro-government thugs over his contribution in the hallowed chambers of the Senate on the possibility of impeaching president Buhari  . On the 18th June, 2019, members-elect of the Edo Assembly who were having a meeting at the Golden Tulip Hotel, Etete, Benin City, were manhandled by pro-government thugs. That incident consumed the Governor’s Chief Security Officer, who was suddenly transfered. Only last month, 12th October, 2019, the National Chairman of APC accused the Edo government of sponsoring thugs to attack him at his Benin home. In Ivbiaro, a serene town in Owan East Local Government, members of Edo People’s Movement (EPM), were attacked and left with injuries. Penultimate week, members of the Edo Civil Society were attacked at the ring-road area of Benin over protest on the ownership status of the Edo Specialist Hospital. And of course, last Saturday, the peace in the remote University village of Iyamho, the home of Adams Oshiomhole, was punctured during the first convocation of the Edo University, Iyamho.

To be continued next week….