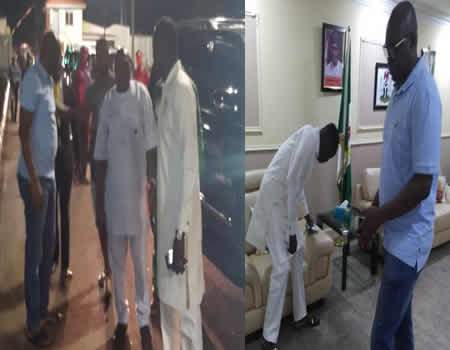 Suleiman was to be arrested by the Department of State Service for speaking against Fulani herdsmen killing of innocent Nigerians at the church’s open air crusade yesternight.

Armed men of the DSS came in three Hilux Vans and were laying siege on the hotel before the Governor stormed the hotel this midnight.

Governor Fayose drove himself to the hotel and moved the Man of God to the Ekiti State Government House, Ado-Ekiti.

Apostle Suleiman had instructed members of his church to kill Fulani headsmen found around his Auchi Edo State headquarter of his church.

The highly vocal cleric has been at loggerheads with leading lights of the present administration such as Kaduna State Governor Mallam Nasir Elrufai whom he prophesied will die for introducing religious control measures in Kaduna State.

He had predicted a win for former President Goodluck Jonathan in the 2015 presidential election. He also predicted that the Peoples Democratic Party will prevail against the All Progressive Congress in the Edo State gubernatorial election.

None of the prophesies have turned out unfulfilled.

He is in Ado Ekiti as part of his pan Nigeria crusade to all the branches of his church.