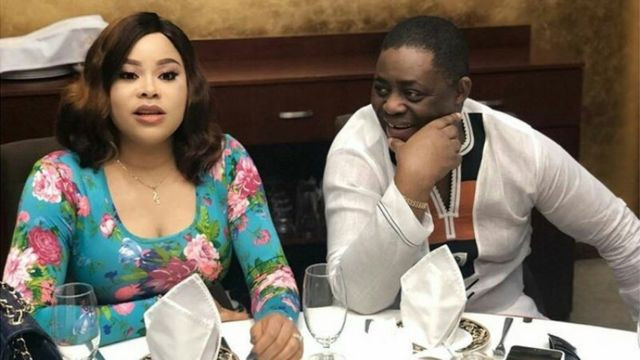 Precious Chikwendu, the estranged wife of former Minister of Aviation, Femi Fani-Kayode, has dragged the Inspector-General of Police, the Commissioner of Police Federal Capital Territory, and her former husband to the Senate Committee on Police Affairs over allegations FFK is using the police to harass and intimidate her.

In the petition submitted before the Senate committee, Chikwendu through her lawyer Abdul-Aziz Jimoh alleged that FFK was using the IGP, FCT Commissioner of Police, and Chief Superintendent of Police James Idachaba, to prevent her from having custody of her four children.

“Following Chief Fani-Kayode’s denial of access to her children, our client proceeded to the FCT High Court on February 10th, 2021, and filed suit number CV/372/2021 against him.

It is simply because of this suit that Fani-Kayode enlisted the services of the Nigerian Police Force to harass our client, by causing his lawyer to write a spurious petition to the Police over the same matter pending in a court of competent jurisdiction.

Chief Fani-Kayode, rather than submit to the jurisdiction of the court and defend himself as would most law-abiding citizens, proceeded to level allegation against our client that she was involved in a criminal consultancy, forgery, and falsification of court records.

The said forgery was purportedly in respect of the receipt of court papers by Chief Fani-Kayode, who alleged that the signature presented by the court bailiff was a forged one. it is more curious to note that these allegations were in respect of a matter pending in court and the normal thing would have been for the court to have been informed formally and the chief registrar of the court duly informed too by the formal complaint.

However, in an attempt to frustrate our client’s custody case against him, Fani-Kayode, a qualified legal practitioner, has enlisted the services of the Nigerian Police to harass, intimidate and detain our clients on numerous occasions after she filed a lawsuit against him.

Since our client instituted a lawsuit against him for the custody of her four children, Fani-Kayode and the Nigerian Police have continued to act in collusion to interfere in the lawful administration of justice by intimidating her to give up on what is lawful ventilation of a legal grievance.

Our client has also filed a fundamental rights enforcement suit at the Federal High Court, with the IGP and other senior Police officers involved in the harassment and Fani-Kayode as parties and they have all been served with the court processes.

The IGP and his officers having been served with the court processes for the enforcement of our client’s fundamental human rights on July 12th, 2021 have since continued to invite, harass and detain her in the Police cell.

Specifically, acting under another petition authored by the same counsel with Fani-Kayode in the child custody case, the Police invited our client via an invitation letter dated 2nd August 2021, and when she honored the invitation dated 4th August 2021, she was detained overnight in a Police cell purportedly over the publication she had made online.

She is asking the Senate Committee on Police Affairs to conduct a thorough and independent investigation into the issues raised in her petition and that the IGP be compelled to stop forthwith in engaging in a less salubrious alliance with Fani-Kayode in his child custody dispute pending at the FCT High Court and the Abuja Division of the Court of Appeal.

We are further praying the committee to stop the IGP and his officers from continuing to invite, harass, arrest, detain or do anything inconsistent with our client’s rights pending the determination of the matter pending at the Federal High Court.”