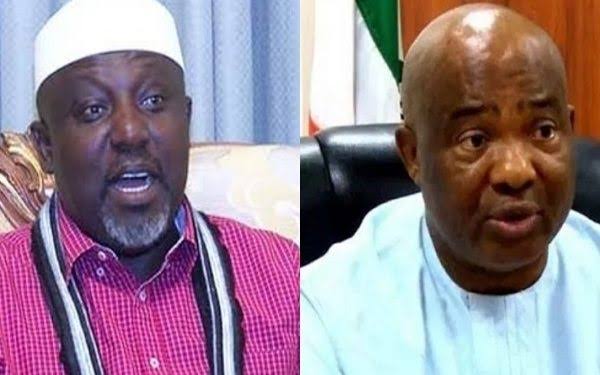 The controversial governor of Imo State, Hope Uzodinma, was at the State House, Abuja, on Tuesday to probably brief President Muhammadu Buhari on the crisis in Imo State. Some stakeholders in Imo State were of the view that Uzodinma may have gone to Abuja to report his political archrival in Imo State, Senator Rochas Okorocha, to President Buhari on the impasse between him and the former Imo governor.

Meanwhile, the governor held a closed-door meeting with the president which details are yet to be revealed. However, presidency sources disclosed that the governor may have been at presidency to explain the political impasse in Imo State that led to the arrest of former Imo governor, Senator Rochas Okorocha, last week and his aides.

This nis the seco9nd visit to President Buhari since he became governor.

The governor admitted he invited soldiers to Imo State.

The Police had arrested 14 persons in relation to the dispute between Uzodinma and Okorocha. A senior legislative aide to Senator Rochas Okorocha, Steve Asimobi, and others were arraigned at a Magistrate Court, Owerri, Imo State, on Monday.

They were accused of ‘forceful invasion’ of the Royal Spring Palm Hotel sealed by the state government without court clearance.

Senator Okorocha detained by the police for questioning on the complaints of the Imo State government was freed on Sunday.