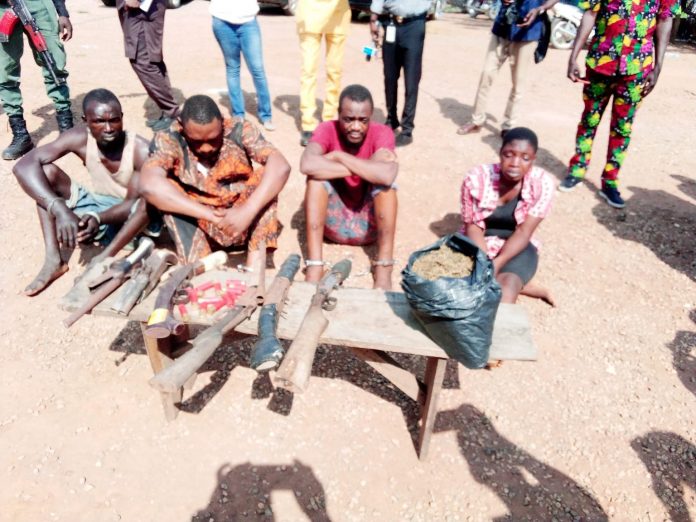 Ige Adu, Taiwo Fayoke, and Bunmi Ogunremi are singing in the cage in Ado Ekiti already, narrating their derring-do since January 2020.

They snatched Akinbami at his filling station, Mrs. Osalusi at her residence close to the station, along the Poly road, Ado, Olowo at Ipoti Ekiti, and the late Ajayi, too, who jumped off the kidnapper’s get-away vehicle on the way to Kogi road, and died later.

Adu and Ogunremi hit the bottom Nov. 6 when the state RRS buttoned up their investigation and swooped in on the suspects: Ige the vulcaizer first, then Ogunremi the transporter, and Fayoke the food vendor.

Addressing journalists during a parade in Ado Ekiti yesterday, the Police Public Relations Officer, Ekiti Command, Sunday Abutu, said the suspects confessed to being responsible for the kidnappings in Ipoti and Ado Ekiti.

“The suspects said they usually keep their victims in his father’s house, one late Chief Bafon, located at Water Works, Ado-Ekiti, and sometimes move them to Ayere Forest in Kogi State before demanding for ransom,” he said.

“I also participated in the kidnap of Mrs. Osalusi. I was given N100,000 on Akinbami’s abduction while I received N450,000 for the second operation. I have made a total of N550,000 from the operations I was involved in,” he said.

The suspects also revealed they usually kept their victims in Ige’s father’s house located at Water Works, Ado-Ekiti, and sometimes move them to Ayere Forest in Kogi before demanding ransoms.

Ogunremi said he had carried out four operations in Ekiti since he started the criminal business, and had reach as far afield as Osun, Kogi and Ondo states.

“When we started, my duty was to drive those suspects who are at large. I drove Alhaji Akinbami and the Surveyor General’s wife to our hideout in Kogi. I have only been involved in four kidnap operations,” he said.

Samuel Ebira, Jimoh Dele known as Dele Petim, Dayo Igwe and Johnson Okada are other members on the run, with a N5m-bounty on their heads.