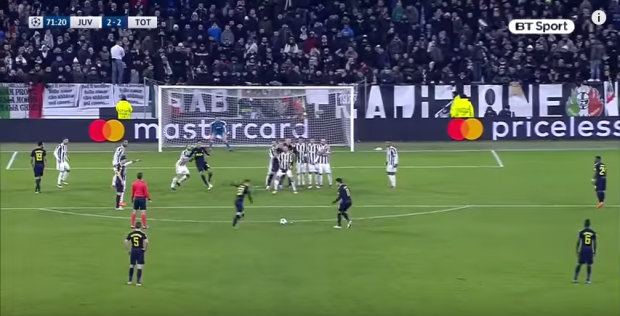 Share this on WhatsApp
Spread the love
By Boluwatife Ezekiel Olaleye
Arsenal goalkeeper, Petr Cech indirectly played a role in Tottenham Hotspur’s equaliser against Juventus in the Champions League round-of-16 on Tuesday.
The Premier League side was two goals down after just nine minutes in Turin but responded through Harry Kane, and then Christian Eriksen.
Eriksen levelled the scores with a cunning free-kick that deceived Gianluigi Buffon.
However, Eriksen’s decision to hit the free-kick at Buffon’s side was heavily influenced by a save Cech pulled off in the north London derby on Saturday with the midfielder opting not to shoot at the far, top corner this time around.
After the match, Eriksen explained to Spurs’ official website, saying, “I had one at the weekend against Cech where I should have gone the keeper’s side and he read it. Luckily today he went opposite.
“But I had a feeling, and I saw the wall move, and I think I saw him take a step as well Buffon, and luckily I changed my mind and went for the other corner and it went in.”
Tottenham goalkeeper, Hugo Lloris also noted, “He almost scored against Arsenal but Petr Cech made a fantastic save.
“But maybe thanks to this free-kick he changed the side and he kicked in the goalkeeper’s side and it worked well today!
“Thanks to him, because the team made a lot of effort to be back in the game and we need out individual players to make the difference at some key moments and it was the case today.”
Also, Harry Kane said, “Massive moment. He had a good one against Arsenal, where Cech made the save, and obviously he went the keeper’s side this time and managed to score.”
Share this on WhatsApp
Related Topics:Arsenal FCChristian Eriksenfree kickJuventusPetr CechTottenham Hotspur
Up Next

Redknapp reveals the club Pogba would be better of with