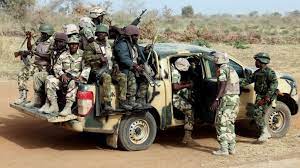 A group, Human Rights Writers Association of Nigeria (HURIWA), on Sunday, condemned the killing of soldiers by non-state actors in Nigeria, just as it unequivocally condemned the reprisal attack by soldiers who invaded Umunze, a community in Orumba South Local Government Area of Anambra State, and shot at unarmed, innocent people of the community at Nkwo Market.

HURIWA’s National Coordinator, Comrade Emmanuel Onwubiko, said the act by the soldiers is condemnable and no reason justifies it under human rights laws.

According to reports, gunmen killed five soldiers in Umunze last week but instead of chasing the gunmen who definitely are not residents of the community, some soldiers invaded the community hours later shooting indiscriminately, and injuring several people at the market.

HURIWA’s Onwubiko protested: “The reprisal by the Nigerian Army at Umunze in Anambra is condemnable and totally against human rights laws nationally and internationally.

“It is important to ask why the military has not carried out such reprisals in Zamfara and Katsina where terrorists killed about four soldiers just this last week. The attention of the world must be drawn to the apartheid and selective revenge missions to Southern Nigeria by the military.

“According to Amnesty International, at least 115 people were killed by security operatives in the South-East from March to June 2021. The figure has grown in the last one year as security forces tag Igbo youths as members of the proscribed Indigenous People of Biafra and gun them down whereas bandits in the north and communities harbouring the bastards are left untouched.

“The Anambra reprisal must never recur. The military, instead of attacking civilians who are inhabitants of the community, should go after the gunmen who must have fled to the bush after they launched the attack. By the way, the Anambra State governor, Chukwuma Charles Soludo, is known to have denounced the killing of soldiers in Umunze but both the Zamfara States governors made no condemnation of the killing of four soldiers in their states. including a Major gunned down by Fulani terrorists, yet the Army hierarchy authorised reprisal against innocent people of Umunze whereas those communities in Zamfara and Katsina were untouched.

“Suspects in the community should be invited for questioning and released immediately if nothing incriminating is discovered but prosecuted if complicit. Anything aside from this is extrajudicial and Nigeria is not a Banana Republic.”

He demanded, “Also, victims of the Umunze reprisal should be paid N100 million as compensation just as the soldiers killed should be immortalised and their direct families compensated.”

HURIWA’s Onwubiko, therefore, declared: “…the continuous and unprovoked killing of soldiers by non-state actors across the country should be concerning to any responsible government. The situation should be analysed and soldiers should be properly equipped and motivated to gallantly repel the onslaught by terrorists and so-called unknown gunmen.

“State governors must also join the efforts to equip and boosting the morale of soldiers. State governors should be unequivocal in condemning atrocious acts like the killing of soldiers in Anambra as was done by Governor Soludo but unlike in Zamfara and Katsina which are the most recent cases. State governors who fail to do so are inadvertently encouraging terrorism by Fulani insurgents and bandits. So far, Governor Chukwuma Soludo of Anambra State has sent strong words to non-state actors in the recent attacks but his counterparts in Zamfara and Katsina appear to cool with the killing of soldiers in their domains.”

How Pfizer COVID-19 booster vaccine intensified cancer out of control