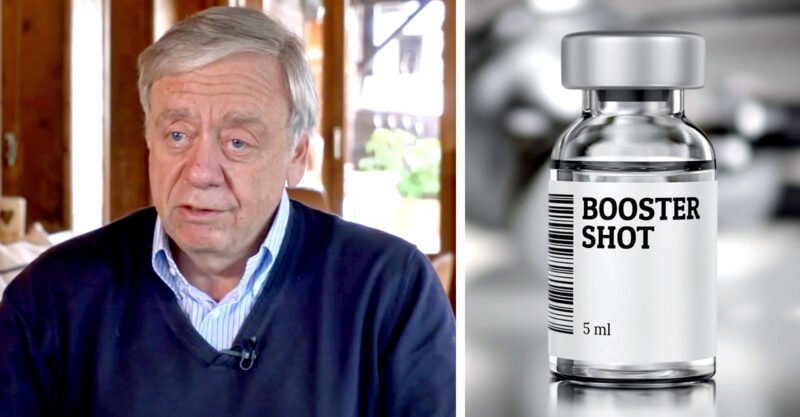 There is emerging revelation that booster dose of Pfizer vaccine may have intensified cancer infection out of control.

A professor of immunology and pharmacotherapy at the Université libre de Bruxelles in Belgium, Michel Goldman, M.D., Ph.D., had disclosed how he suspected the cancer infection he had was converted into overdrive after he received third dose of Pfizer COVID-19 vaccine.

The 67 years professor of immunology and pharmacotherapy at the Université libre de Bruxelles, Belgium, Michel Goldman, M.D., Ph.D., one of the best-known promoters of medical research and promoters of COVID-19 vaccines in Europe has become a victim and resolved to expose the hidden information on vaccines.

Michel Goldman engaging in public discussion of the COVID-19 vaccine for transparency, revealed ‘his suspicion that the Pfizer booster shot he received on September 22, 2021, may have induced rapid progression of his angioimmunoblastic T-cell lymphoma (AITL), a type of lymphoma he was diagnosed with before he received the Pfizer COVID-19 vaccine booster.

The professor said that after his diagnosis, he proceeded to receive the booster shot, “believing he would need it more than most people because once he started chemotherapy, his immune system would be compromised”.

Goldman said that after receiving the shot, his follow-up CT scan revealed a surprising result. He said that in a few days, his cancer developed ‘so fast that cancerous points were lighting up all over his scan.’

Goldman brother, Serge Goldman, a fellow scientist, and head of nuclear medicine at the teaching hospital of the Université libre de Bruxelles, also perceived the  COVID-19 vaccine booster shot to have accelerated the rapid proliferation of cancerous growth in Goldman’s body.

Serge Goldman was gathered to have expressed that the initial CT scan was “a bit disturbing,” after the scan revealed ‘an asymmetrical cluster of cancerous nodes around Goldman’s left armpit, where Michel’s first two doses of vaccine had been delivered’.

It was emphasised that “the CT scan done after Michel’s third dose showed the cancer’s asymmetry had flipped and was clustered by his right armpit, where he received the third shot.”

The medical experts considered it necessary to investigate the possibility that the vaccine might be behind the clustering, “because it could mean other people with certain forms of cancer might be at risk of a COVID-19 vaccine causing their cancer to progress more rapidly”.

The Goldmans had on November 25, 2021, requested ‘the scientific community to study the phenomenon to see if it occurred in patients diagnosed with AITL’.

The Goldmans in a paper, wrote: “Since nucleoside-modified mRNA vaccines strongly activate T follicular helper cells, it is important to explore the possible impact of approved SARS-CoV-2 mRNA vaccines on neoplasms affecting this cell type.”

They postulated that the case study “suggests that vaccination with the [Pfizer-BioNTech] BNT162b2 mRNA vaccine might induce rapid progression of AITL.”