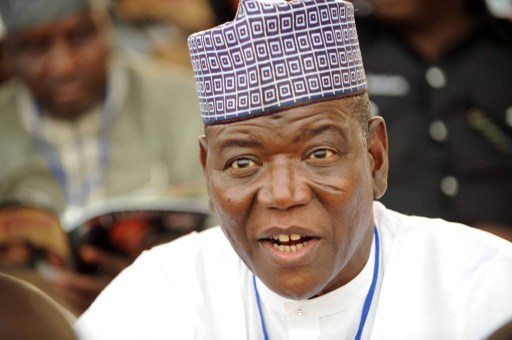 Share this on WhatsApp
Spread the love
Jigawa’s former Gov. Sule Lamido has solicited support of Gov. Ayo Fayose  for his presidential ambition.
He made the appeal to the governor when he visited the governor in Ado Ekiti, on Tuesday.
Lamido also appealed to party leaders to form a strong alliance so that the party could win the 2019 poll.
“We can defeat them easily if we all share the same thought and pains as Nigerians are feeling now,” he said.
ALSO SEE: Fayose defeats EFCC in court
The former governor said he decided to visit Fayose to confer with him on his presidential aspiration.
Lamido praised Fayose for his courage, describing his bravery and outspokenness as an impetus to the country’s democracy and tonic that had been spurring the opposition party ahead of the next year’s general election.
“You are a man of courage and a man of character who is able to stand up for the people, in spite of intimidation. I respect you, I admire you and like you a lot. “In PDP, we were in power for 16 years, somehow we lost out, we should ask the questions, where was Nigeria before PDP?
“The vision of our founding fathers like Chief Obafemi Awolowo , Aminu Kano, Ahmadu Bello and Tafawa Balewa had been that there should be a Nigeria populated by human beings first not tribes, regions or zones.
“We cannot forge ahead if we are governed by culture of hate. We are failing today because we have people who are alien to democracy on board.”
Responding, Fayose described Lamido as eminently qualified to be president of Nigeria, saying he remained one of the few detrabilised Fulani leaders with capacity and exposure to deliver.
“I am among those that would continue to celebrate your contributions to our country. I believe in Fulani people, every tribe has the good and the bad. You are one of the Fulani men that I know have the abilities to perform “We lived in this country and grew up to know that everyone from any tribe is our brother but when a government fails, the nation fails.
“Some people say they will rig election, but I tell them, God rules in the affairs of man. Power belongs only to God almighty,” Fayose said. Former Vice President Atiku Abubakat came visiting last week, offering to give the PDP southwest arrowhead the V.P. in his 2019 shot at the presidency.
Share this on WhatsApp
Related Topics:2019 presidential electionformer Gov. Sule LamidoGov. Ayo FayosePeoples Democracy Party (PDP)
Up Next

Hundreds of NGOs up for Buhari 2019